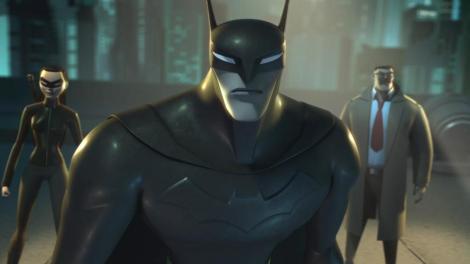 Ra’s al Ghul recruits all of the super villains Batman has brought down (Professor Pyg, Mister Toad, Magpie, Tobias Whale, Phosphorus Rex and Cypher) to eliminate Batman in exchange for control of a piece of the city. Batman races to find Ra’s location and save both his partners and the entire city while Lt. Gordon and Barbara attempt to hack and disable the Ion Cortex once and for all.

The conclusion of the previous episode left the audience on a cliffhanger with Ra’s having decided to bring Batman’s entire current rouges gallery together to beat him. This episode was not so much a third part to the tale but more of tying up loose ends that had been present in the previous two parts. Though on its own the episode would not work together with the two preceding episodes it makes a good climax to the story arc.

This episode feels too action based with Batman spending most of the episode either beating people up or being beaten up by Ra’s and so the episode doesn’t feel as dramatic as the previous two episodes. It feels more of a plod along rather than a race to see the climax. The story arc would have been better if it had been condensed into two episodes rather than three giving it more of a streamlined edge.   The scenes with Batman and the rogues fighting, for instance, weren’t really needed and didn’t add anything to the story. Even with these criticisms the story is still enjoyable to watch with the scenes between Gordon and his daughter particularly amusing.

His bemusement and subsequent acceptance that his daughter is a top notch computer hacker help to add character depth as well as provided comedy. It makes sense of how Gordon copes with living in a world of superheroes and costumed villains. He feels bemused and then forces himself to accept it because railing against it won’t help him keep Gotham safe which is Gordon’s main motivation.

All in all, Reckoning was a good little gap stopper between the end of this arc and the beginning of the next arc. It shows off Gordon’s character in a good light and manages to wrap up the previous arc in professional way.