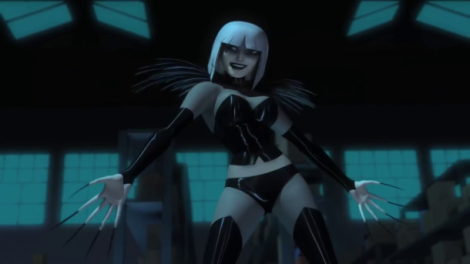 After Batman shows pity to Magpie in Blackgate prison, she breaks out from the prison. Willing to kill Katana in a jealous rage, The Dark Knight must stop here before his latest requite to crime fighting is killed.

The episode opens with Batman and Katana taking Lugg Head back to Blackgate prison. While there, he is spotted by Magpie who is still imprisoned there after the events of the episode “Secrets”. Batman speaks to Magpie briefly before being told by Katana they have to make a move. Noticing Katana, Magpie becomes enraged and decides to break out as she thinks Batman “needs her”. Using Lugg Head as an accomplice, Magpie escapes and embarks on a rampage of Gotham leaving Bat Symbols all over the city. Batman and Katana chase after her. Katana is captured which leads to a thrilling climax to the story in which Magpie and Batman fight in the cemetery in which Magpie’s real self, Margaret Sorrow was “buried”.

Beware The Batman surpasses itself in this episode.  The story shows what can happen when a fanatic becomes fixated on a figure of authority (like Batman) but it is also mediation on the whole concept of Batman. Can someone who regularly deals with the forces of darkness and is forced to work outside of the law be uncountable? Magpie, rather like Catwoman in Batman Returns stands as a figure attempting to corrupt Batman and bring him onto the side of darkness. The episode concludes with Brue Wayne meditating on just this question and the episodes gives no easy solution to this problem which is at the heart of the Batman myth. The episode manages to juggle the two ideas that it presents very well and will hopefully make the audience question things, something that all good TV should do.

The voice cast is as always great but especial credit must go out to Grey DeLisle as Magpie/ Margaret Sorrow. She manages to give the character vocal versatility and goes from a rather sing songy tone to a dark rasping whisper in a matter of seconds. It is a talented performance from a great returning character.

Attraction is probably the best Beware The Batman episode yet and demonstrates that the team behind the series have dedicated time and effort to producing a great cartoon that can be enjoyed by adults and children alike.