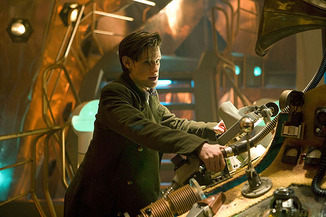 Doctor Who showrunner Steven Moffat has announced that Series 8 has “definitely, honestly” been commissioned and is already in the planning stages.

Speaking at the BAFTA Television Awards in London this week, Moffat commented: “This is a thing that just seems to have slipped by… so can I say it very firmly – Series 8 is absolutely, definitely confirmed. It is real and it’s happening – it’s [taking up] most of my time at the moment.”

He added: “I get people telling me [that Series 8 is] not really happening. It really, definitely, honestly is!”

Jenna-Louise Coleman has confirmed that she will return as Clara in Series 8, but Matt Smith‘s involvement beyond the upcoming 50th anniversary special is uncertain.

Series 7 concludes this weekend with ‘The Name of the Doctor‘ at 7pm on Saturday on BBC One.

Information taken from The Cult Box.

2 responses to “Doctor Who Series 8 Confirmed”