To celebrate the 50th anniversary of Doctor Who, I shall be conducting several interviews throughout the year with members of the Doctor Who team past and present. The third in the series is with the great actor and very nice bloke Terry Molloy famous for playing Davros on audio and TV. In more recent years Terry has also become more known to sc-fi fans as Professor Dunning in the fantastic audio series The Scarifyers. He has also been for several years a regular in The Archers! What a chap.

Hello Terry, thank you for agreeing to this interview. Your Davros has battled against the fifth, sixth, seventh and eight Doctors on audio and TV. Which of the remaining living Doctor’s would you like to play Davros opposite?
Hello. Well, I love the psychological battles between The Doctor and Davros and always will, and each Doctor brings a new dimension to that battle, so I must say I would love to play opposite them ALL, one by one, if that were possible please!
You play Professor Dunning in the excellent audio series The Scarifyers, first with the late great Nicholas Courtney and now with David Warner. What do you think makes the series so successful?
Oh Crumbs!!! Simon Barnard and Paul Morris have created a wonderfully anarchic series with the bumbling academic (Dunning) and the rough and ready copper (Lionheart & now ‘Thumper’ Crow) teamed up as unlikely partners in solving paranormal mysteries. Both characters have great warmth (and a lot of silliness) in them, and the surreal story lines complete the mix. A lunatic cross between Dick Barton (for those old enough to remember the classic BBC radio serial) and the X Files, complete with 1930s lantern jawed delivery…. and tongues planted firmly in our cheeks!
You have appeared in several documentaries about Doctor Who. Is it fun to appear in the documentaries? Do you have any interesting memories that you had forgotten but were brought back to the front of your mind because of the documentaries?
I enjoy talking about my work on Doctor Who and being part of such an iconic series. Narrating through an episode or doing an interview sometimes stirs up memories, and especially when talking with another member of the production from that time or place.
Why do you think Davros is such an enduring character not just in Doctor Who but in popular culture?
We all seem to have a fascination in the perpetrators of ultimate evil.. and Davros totally personifies that! Both Davros and the Daleks have been associated from their genesis with a ruthless desire to dominate all other races and species and a conscienceless attitude to the extermination of those who get in their way. And of course, we all like to be scared by the ultimate evil from a place of safety…behind the sofa!

Like the Daleks, he seems to have achieved a cult status as one of the Doctor’s most villainous adversaries
He has. I never thought I would be associated with such a cult character. It is both pleasing and scary, pleasing to keep being asked to re-create the character and scary to bear the responsibility to keep getting him right! Also, from working on the Big Finish audios, we have been able to explore his ‘back story’ and show how he is able to plot and plan and function without the Daleks being there to back him up every time.
Several actors have appeared in Doctor Who in different roles, most famously Colin Baker prior to his casting as The Sixth Doctor. You appeared in Attack of The Cybermen as Russell. Would you like to appear similarly in the new series as another non Davros character?
All actors love to be kept working  and most actors will say how much they would love to be in Doctor Who! Well, I’m no exception to that rule, and would really love to do something else on the programme away from the prosthetic rigours of Davros!
Are you at all involved with Doctor Who’s 50th anniversary celebrations in audio, TV or some other medium?
If I told you… I’d have to kill you!! Can’t say either way!

I, Davros was a mini series produced by Big Finish in 2006. The series told Davros’s story from his early years to just before Genesis of The Daleks. How did the series come about?
We had done a number of BF stories with the character and Gary Russell approached me and suggested that we could perhaps explore Davros’s journey from young man to monster, the how and why of his past, in a way that had not been attempted before. I was delighted that we were setting down the ‘cannon’ of Davros’s emergence into the evil genius we all love to hate, as well as filling in a lot of the detail of how the mix of Nature and Nurture led to his megalomaniac thirst for conquest.
If you could play any character other than Davros in the Doctor Who franchise, which character would it be? The Doctor perhaps? Or one of the companions?
Come on! Who wouldn’t like to play the Doctor? Maybe it should be an older actor once more but I know it wouldn’t be me! The idea of a bumbling older geeky companion is nice… or maybe another more subtle villain than Davros? Who knows?
You played DI Burke in P.R.O.B.E.: The Devil of Winterborne. What was it like making that particular project?
A fascinating experience working with Mark Gatiss and Reece Shearsmith in their early days before League of Gentlemen kicked off. A wonderfully dark piece and it was nice to be working alongside Peter Davidson once more with Caroline John and Louise Jameson too. There was talk of doing another story with the same characters, but nothing came of it.
What other projects are you working on at the moment?
‘Mike Tucker’ in The Archers continues to feature a fair bit in my working life, as he has done for the last 40 years…! Is it really that long? Yes it is as I joined the programme way back in 1973, when my hair was longer… and darker.. and my waistline slimmer!! I’m sure we will be doing another Scarifyers this year, and I am looking forward to doing more theatre work now recharging the creative batteries in front of a live audience is such a buzz! 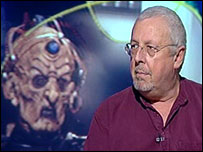 3 responses to “Interview with Terry Molloy (Actor, Doctor Who, The Scarifyers, The Archers and PROBE)”