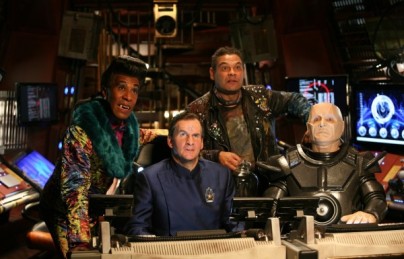 Every Father’s Day, Lister sends himself a card due to the fact that he is his own father. While Lister tries to deal with this and realises that he needs to do something with his life, Rimmer and Kryten install a brand new computer.

At first, the two quite opposite storylines of Fathers and Suns doesn’t make sense until the end. This may perplex the audience but stay with it; it gets better. The way Doug Naylor manages to mix the two storylines together into one cohesive story is brilliant. The jokes are funnier than last week’s episode Trojan and the laughter track sounds more genuine and less annoying. Naylor seems to have remembered how to write Red Dwarf, with this episode not only mixing elements from the first few series but also uses the intelligent quality of three dimensional characterisation evident in the latter series.

Craig Charles sparkles in this episode as Dave Lister.  Charles is particularly excellent in the scenes in which he pretends to be two separate people, his imagined father and himself. The conversation though perhaps a tad stereotypical is none the less well played by Charles.

It seems that even after such a long break, Red Dwarf still has the power to make an audience laugh. Hopefully, the series will continue to improve and continue for a long time to come.