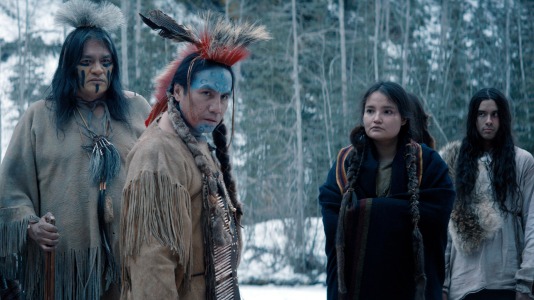 In mid-1800’s Russian American, Subienkow finds himself the second-to-last survivor of a group of Russian fur-thieves who have just been defeated by liberators from the local tribe they have enslaved as forced labour.  Now Subienkow faces a long, protracted and painful death unless he can come up with a plan for escape.

Adapted from the titular story of Jack London’s classic short story collection, Lost Face is a macabre, darkly comic film centred on the attempts of a Russian fur trader called Subienkow to find a way of escaping the brutal torture that faced his fellow fur thieves. Like an episode of Inside Number 9 or The League of Gentlemen, its brilliance lies in its mixture of dark comedy and of horror to ensure that the audience is left uneasy but paradoxically amused.

Martin Dubreuil is excellent in his performance as Subienkow. He portrays the character’s wily cunning in a sophisticated and unique way. Dubreuil’s injects a certain likeability into Subienkow and you feel yourself rooting for the character to some extent, even though he is a thoroughly unlikable profiteer. Yet Dubreuil’s portrayal of him is energetic and engaging enough for the audience to at least gain some sympathy for him if not respect.

Lost Face is a dark, witty and thoroughly engaging film which is fascinating in its portrayal of a forgotten moment in American history as well as being an entirely entertaining gruesome comedy of errors that reminds us, that it is easy to be tricked if you don’t understand people’s motives.