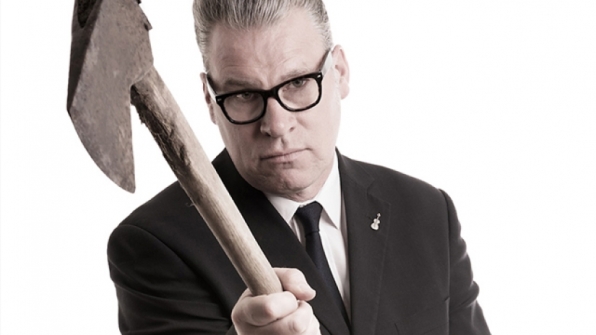 Criticising a critic isn’t something I like to do. They’re paid to do a job, go to see a film, a play, an exhibition and give their opinion. How could you have anything against that? Yet there comes a time when it feels appropriate to voice my annoyance at one critic in particular, a man who I’ve always admired and still do admire. Mark Kermode. Kermode’s Radio Five Live Show with Simon Mayo has been on for years and there are hundreds of reviews that you can watch on Youtube. Kermode is often a great reviewer; whether you agree with him or not you can’t help but accept that he often has a point and can critique a film well. Yet I didn’t feel this in his review of Darkest Hour.

In his review of Darkest Hour, Kermode made clear that he didn’t like the film – fair enough. He attempted to smother his review in praise for Gary Oldman’s performance as Churchill. Kermode then went on to say that he didn’t enjoy the film, commenting on the tube scene’s believability (a fair enough point but one Kermode exaggerates to the point of ridicule). He then goes on to say the dialogue felt artificial, that it was too theatrical – incidentally, Kermode has always had a snobbish view of television and to some extent the theatre as well, that has always annoyed me. Again, this is fine but Kermode uses only one example – when Lord Halifax is referred to at the start of the film as “our Foreign Secretary.” This only ever occurs once and for Kermode to make such a big deal of it, implying that it means writer Anthony McCarten was looking down on the audience. Yet surely Kermode, as any decent reviewer should know, that the film is intended for a worldwide market and that to attack the film for not presuming that its audience would know everyone in the 1940 War Cabinet is incredibly facile and somewhat snobbish. It is also somewhat surprising coming from the man who was shocked to find that Charles Dickens was energetic as a young man (having previously reviewed a documentary about his life) and whose knowledge of Macbeth was York Notes standards at best. This review put me off the film somewhat prior to going to it because I trusted Kermode’s opinion (not blithely of course; I still went.)

As I watched the film I couldn’t understand why Kermode hadn’t liked the film – the flaws that he presented seemed far from apparent. It was only at the denouement that I realised why Kermode had disliked it. It was not because of the reasons that he had stated – it was because it presented politics and Churchill, in a positive light. Yes, the film shows Churchill’s many flaws but it also shows his strengths. The film ends with Churchill making one of his greatest speeches to applause in the House of Commons before marching out into the end credits. How do I know that? Kermode said this himself when reviewing the 2012 release of In The Loop with Alistair Campbell (incidentally, Campbell’s opinion on the film is one I disagree with also – it is a very good film). Kermode said during his review that he had “sympathy with anything that portrays politics as essentially venal and crass because, I think, to a great extent, it is.” This is the reason he disliked the film – not because of its apparent flaws which are very minor and not particularly detailed criticism but because Kermode cannot simply judge something based on its artistic merit but because it doesn’t fit with his world view. Now this may seem as slightly circumstantial, but I feel that it is more likely than not true.

The icing on the cake, however, came a few days later when Kermode posted a vlog about his criticism of the film. He recounted how he had been speaking to another “anonymous” critic who said he felt as if he couldn’t critique the film because of the “political culture” of the moment. Kermode goes on to imply throughout the vlog that anyone who suggests or argues that his review of the film is flawed is doing it because of patriotic pride. What is laughable is that Kermode, who criticised the film because it supposedly spoke down to its audience because of one line of explanatory dialogue, talks down to his own audience by suggesting that anyone who disagrees with his shallow review of the film is some Hard Brexit political extremist. I am not a Hard Brexit political extremist – in fact, in many ways, Kermode and myself are probably not that far apart on the political spectrum. Yet his insinuation is as annoying as is his failure to address in his review why he disliked the film. It is interesting to note that his review of Steve Spielberg’s The Post (another excellent film) garnered a glowing review partly because you could draw parallels between Nixon and Trump.

I’m sure Mark Kermode is a nice man and I still think he is generally a good reviewer but his failure to be honest about his dislike of Darkest Hour and not to be candid about his failure to judge a piece of art on its own merit rather than attacking it because it goes against his own political ideology makes me loose respect for him. I can only hope that in the future he tries to judge such films more fairly.