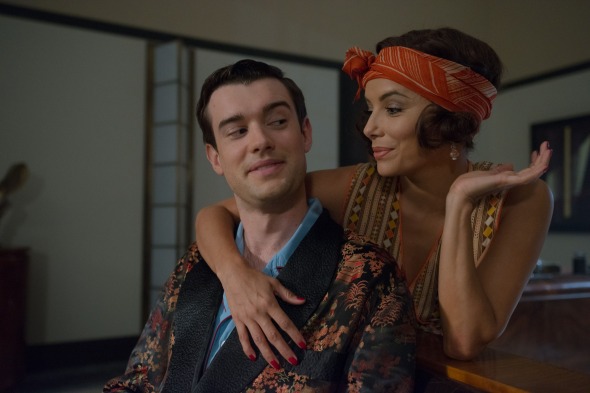 Paul Pennyfeather is thrilled when he is invited to spend the long summer holidays tutoring Peter Beste-Chetwynde, a pupil from his school. Not, however, because he loves to teach, but because Peter’s mother is Margot Beste-Chetwynde – a wealthy and beautiful widow who Paul has instantly fallen deeply in love with.

But Margot’s world is one in which Paul is not overly comfortable. As a socialite, her glamorous home is almost constantly filled with the fashionable upper echelons of society. Can Paul keep it together and not make a fool of himself? Can he see off other suitors, and win Margot’s heart? And – perhaps most importantly – is Margot herself all that she seems?

As with the first episode of the BBC’s brand new adaptation of Evelyn Waugh’s Decline and Fall, quality is abundant. The quality of acting is superb; the music is wonderful and the locations are fantastic. As Paul is swept away from the crumbling ruin of Llanabba to Margot’s absurdly 1920’s house, we begin to see Waugh at his wittiest – his razor-sharp wit is perfectly appropriate for the modern day, with the fallacy of society and fashion wonderfully ridiculed by Waugh and brought to life by this production. Waugh’s wit runs through Decline and Fall like Blackpool does a stick of rock, and like a stick of rock, it is deliciously sweet. Waugh’s satire of pretentious, posturing society is personified by Margot and her architect friend, Otto Silenus. Otto, in particular, with his desire to design factories rather than houses is particularly biting satire of modern architecture and is all the more enjoyable for this.

As with the previous episode, the acting is wonderful. Though he has a smaller part in this episode, David Suchet gives a resoundingly bombastic performance as Doctor Fagin, displaying all the traditional attributes of the comedy school master. Jack Whitehall’s central performance is equally excellent, making Pennyfeather the eye for the audience – his incredulous reaction to Margot’s society friends is wonderfully delivered by Whitehall and is one of the highlights of the episode.

However, the episode is stolen by Douglas Hodge’s fantastic performance as Captain Grimes. Grimes is perhaps one of Waugh’s greatest creations – lecherous, drunken and hilarious. He is at his best during his marriage to Doctor Fagin’s daughter, Flossie (Katy Wix) when in desperation he attempts to find any way of preventing his marriage to her. Hodge’s performance is the cherry on the top of an exquisite cake and ensures that Decline and Fall will remain a classic for years to come.

The second episode of Decline and Fall not only continues Pennyfeather’s journey from future vicar into a far seedier world than he can possible imagine, it also highlights the wonderfully complex nature of life as it highlights its comedic side as well as its realism. –It demonstrates its foibles, its joys and bizarre moments too. In short, if you want to watch entertaining drama that amuses but never talks down to you, then the second episode of Decline and Fall is for you.