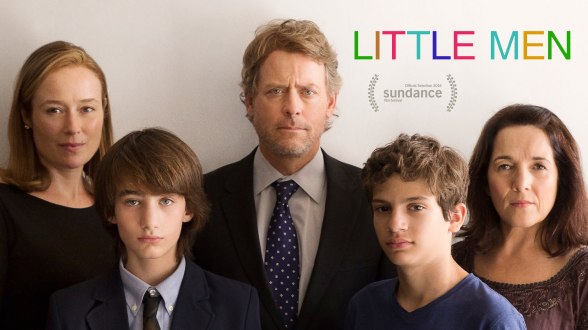 Jake’s parents Brian (Greg Kinnear) and Kathy (Jennifer Ehle) – one, a struggling actor, the other, a psychotherapist – ask Leonor to sign a new, more expensive lease on her store. For Leonor, the proposed new rent is untenable, and a feud ignites between the adults.

At first, Jake and Tony don’t seem to notice. The two boys, so different on the surface, begin to develop a formative kinship as they discover the pleasures of being young in Brooklyn. Jake aspires to be an artist, while Tony wants to be an actor, and they have dreams of going to the same prestigious arts high school together. But the children can’t avoid the problems of their parents forever, and soon enough, the adult conflict intrudes upon the borders of their friendship.

Little Men is a film that is not unique in conception; there have been many films made about growing up in Brooklyn and aspiring to be an actor or artist. Yet, in execution of Little Men is a work on its own. Rather than examine a wide subject that would dwarf the film – such as the meaning of art, Little Men instead focuses on the dreams of children and how they can be shattered by the adults in their life. The films core revolves around this question – can friendship and a mutual love of art outweigh the crushing realities of everyday life?

The two central performances by Theo Taplitz and Michael Barbieri hold the film together. Their obvious chemistry and likeability shines through in all of their scenes and they make the film special. Taplitz attempts to convince his father (Greg Kinnear) to let the Calvellis stay is a particularly resonant scene as if the bittersweet ending.

Ira Sachs’ direction is particularly effective. His filming of Brooklyn is sublime and captures the essence of the borough; similarly, his depiction of the boys visit to a rave is filled with energy and visual resonance. Sachs’ final scene is a testament to his genius; it is quiet, low key and yet filled with such meaning and character it makes you want to watch the film again, if not to see the final scene once more.

Little Men is timeless because it speaks to a part of us that wants to never grow up and accept the tough decisions we have to make to live. It is also a beautiful depiction of childhood friendship that will resonate with audiences everywhere.

With thanks to We Are Colony, you can purchase Little Men here.