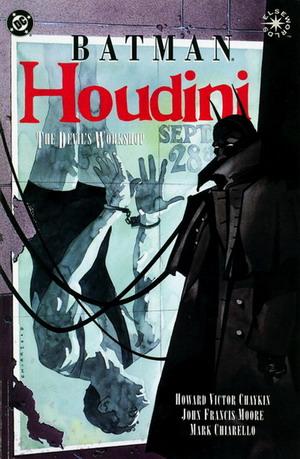 The Master Magician Meets The Man of Mystery.

Escape artist supreme Harry Houdini and the eerie Bat-Man race through the streets of Gotham of the 1900s searching for a twisted creature whose unspeakably evil scheme could destroy the city’s children.

Like most Elseworlds stories, The Devil’s Workshop takes the core concept of Batman and flips it on its head. Taking The Dark Knight from his traditional settings and throwing him into the middle of the past is an interesting idea in itself. Yet the extra piece that makes it electric is: what if this past Batman worked with Harry Houdini?

This interesting concept is swiftly developed by Howard Victor Chankin and John Francis Moore, the authors of the book. Rather than making Batman the narrator or simply telling the story from an omniscient point of view, Chankin and Moore decide to use Houdini as the narrator. Thus, as Houdini is presented as an unreliable narrator (throughout the book he continually refers to Batman’s flaws whilst praising himself) it gives the book a unique flavour. It helps develop Houdini’s character, the continual showman, whilst also demonstrating his relationship with Batman – one of mutual respect though a hint of jealousy about Wayne’s inherited wealth from Houdini’s point of view. Chankin and Moore also inject high Victorian melodrama into the dialogue but not too much to alienate a modern reader; Batman’s resounding “You’ll burn in hell for what you’ve done, mad man!” will surely encourage many a reader to grin from ear to ear. 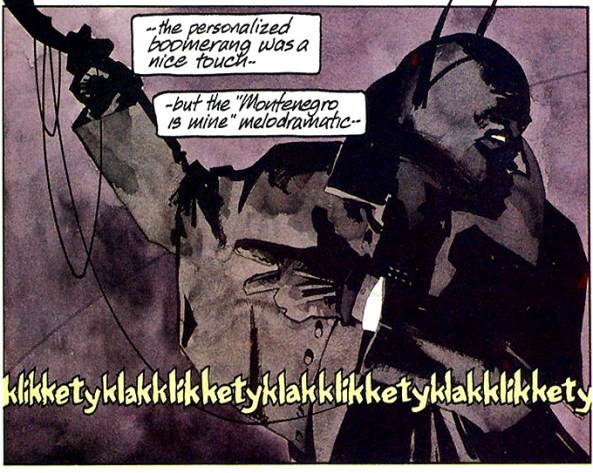 The artwork is also stunning. Mark Chiarello’s artwork is in some places reminiscent of Alex Ross but with a darker pallet. Chiarello captures the murky and grimy underworld of early modern America excellently and his design of the Bat – Man is exquisite. Chiarello manifests his Dark Knight as a grim reaper of justice fit for the gloom of the 20th Century.

In conclusion, The Devil’s Workshop is a magnificent piece of work that is alive with the gothic traditions of the age it portrays as well as those of the age of comic books.