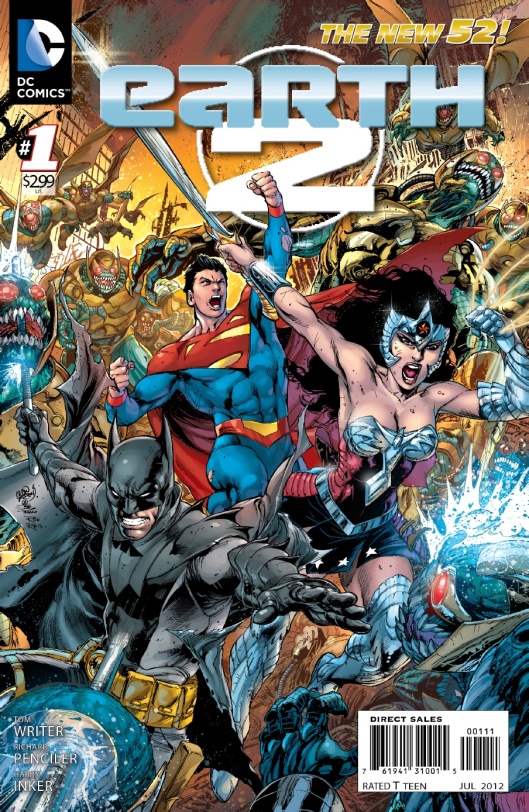 Apokolips has invaded and Earth has never been closer to total destruction. In its finale, desperate hour, the planet’s greatest heroes rally to defeat the Parademon army. Knowing full well what the ultimate cost could be.

This is not the world you’re used to. This is Earth 2.

Now, years have passed and Earth has rebuilt, but a new even greater threat looms. Facing utter annihilation, the human race must turn to the most unlikely of heroes.

Green Lantern, The Flash, Hawkgirl and the Atom are all familiar faces but not on this world. Distrusted and unknown, these strangers must stand against the forces of the Grey as it siphons the life from Earth itself. But the Grey’s champion, the undead Solomon Grundy, can’t be killed… so how can this new team of heroes hope to succeed?

Reinvention is a constant of superhero fiction. The most iconic characters have been constantly changed and updated to suit the needs of the times they are written in. The Justice Society is one of those institutions. The precursor of The Avengers and The Justice League, The Justice Society existed primarily in the 30s and 40s. Yet when DC changed so did they, shifting from being part of the main continuity of the DC universe to being an alternative set on Earth Two. The concept of multiple worlds has also been updated and Earth 2: The Gathering is one of the best modern updates to this timely team.

The series follows the development of a new set of “wonders” who are tasked with keeping the Earth safe from its latest threat. To not only reintroduce popular characters in a new setting but also to create an entertaining adventure is a tall order. However, James Robinson expertly pulls this off. By starting the tale in the middle of the final battle of the Trinity against Darkseid, Robinson begins on high stakes. Many lesser writers would falter under the immediate dramatic pressure of this yet Robinson simply keeps the dramatic impetuous going. Like a magician, he conjures further threats out of cast of characters whilst interweaving it with character development. Each of the main group Green Lantern, Flash, Hawkgirl and Atom are given a chance to shine and demonstrate their individual character traits though the latter two are somewhat neglected during the end of the book.

The artwork of Nicola Scott is excellently done. Scott masterfully uses a realistic style whilst injecting in streams of colour into her artwork, successfully combining the best of modern and classic artwork. Her design of Green Lantern and the Flash are particularly noteworthy for their originality. Scott does not simply rehash the original outfits of the characters but rather adapts them for the modern world whilst also keeping close to their comic origins.

I’d highly recommend Earth 2: The Gathering as it creates a brand new world filled with opportunity whilst also keeping true to its comic book roots.  This is a winning combination.