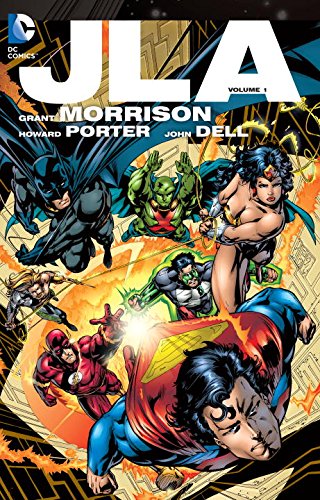 Almighty gods watch over us – or at least that’s how it must seem to the human populace of the DC Universe. The pantheon of the World’s Greatest Superheroes – Superman, Batman, Wonder Woman, The Flash, Green Lantern, Aquaman and Martian Manhunter are Earth’s first line of defence against the high priority threats facing mankind. As the most powerful beings on the planet, the JLA are a force to be reckoned with which doesn’t stop them receiving continuous attacks by alien invaders, renegade angels or their deadliest enemies.

The Justice League of America was modern comics first super hero team, appearing three years before the Avengers. Whilst the 1940’s Justice Society of America, also created by DC, were the first superhero team, the JLA had an edge and a modernity to it that helped define how we see superhero teams today. By the mid-90s though, the League was seen as more of a joke due to the revamped Justice League International series which played up on the comedy of some of its members – notably Blue Beetle, Guy Gardner (then the Green Lantern) and Booster Gold in contrast to more serious characters like Batman and J’on J’onzz, The Martian Manhunter. This lead to a fall in sales and the League was rebooted by Grant Morrison to better reflect the JLA’s past leading us to JLA Volume One.

Morrison’s timely update of the JLA brings the main group back together in a way that makes each of them have a point. In the past, particularly the Justice League International days, certain members of the team felt as if they were there to make up the numbers or to crack jokes rather than work as an effective superhero team. Yet both in the first story in the book and the original tale, they work effectively as a team with each of their personalities coming into play. Batman’s strategic brilliance; Superman’s gut instinct and strength; The Flash’s speed and scientific ability alongside the other League members all helps to make JLA Volume One feel like a team book.

Morrison writes the interactions between the time particularly well – Superman’s concerns of the new Green Lantern, Kyle Rayner’s, suitability to work in the League; Aquaman’s overriding interest in working for the people of Atlantis rather than the Earth as a whole and Wonder Woman’s persuading that if he doesn’t help them Atlantis will be beyond help to make the characters feel real. They all have their own differences in methods and personalities – which helps the book work. Rather than simply forcing premade roles onto each of the team – the leader, the joker, the scientist etc Morrison makes his JLA feel organic. They grow and develop through the book naturally rather than as stilted archetypes.

The artwork for the book is generally good, though there are occasions when some of it goes over the top; for instance, in the first story Batman’s cape becomes ridiculously long when he jumps down from his hiding place, making it seem as if he has created a nest around himself rather than a cape. Similarly, in certain panels, Superman displays the type of musical contortions you might expect of a circus performer and not the Man of Steel. However, the lavish detail given to the Martian transformations in the first story makes me forgive them for some less than aesthetically accurate choices in other parts of the book.

Overall, JLA Volume One is a lavish and exciting take on the world’s greatest superhero team. It is smart, action packed and most of all tries to be fun. It’s a shame more comic books now don’t take the lead of Morrison’s JLA.

3 responses to “JLA: Volume One Review”