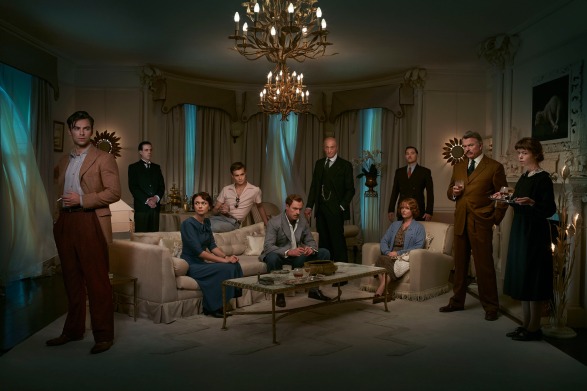 The BBC has today released the first promotional picture for their new series based on one of Agatha Christie’s most well known books: And Then There Were None.

Agatha Christie’s And Then There Were None is the best-selling crime novel of all time, with 100 million copies sold worldwide, and now for the first time the book will be adapted into a major new television series for BBC One.

With an illustrious cast in place, Mammoth Screen and Agatha Christie Productions have begun filming a three-part adaptation of the author’s masterwork, by Sarah Phelps (The Casual Vacancy, Great Expectations).

1939. Europe teeters on the brink of war. Ten strangers are invited to Soldier Island, an isolated rock near the Devon coast. Cut off from the mainland, with their generous hosts Mr and Mrs U.N. Owen mysteriously absent, they are each accused of a terrible crime. When one of the party dies suddenly they realise they may be harbouring a murderer among their number.

The 10 strangers include a reckless playboy, a troubled Harley Street doctor, a formidable judge, an uncouth detective, an unscrupulous mercenary, a God-fearing spinster, two restless servants, a highly decorated general and an anxious secretary. One by one they are picked off. Who will survive? And who is the killer? Copies of an ominous nursery rhyme hang in each room, the murders mimicking the awful fates of its ‘Ten Little Soldier Boys’.