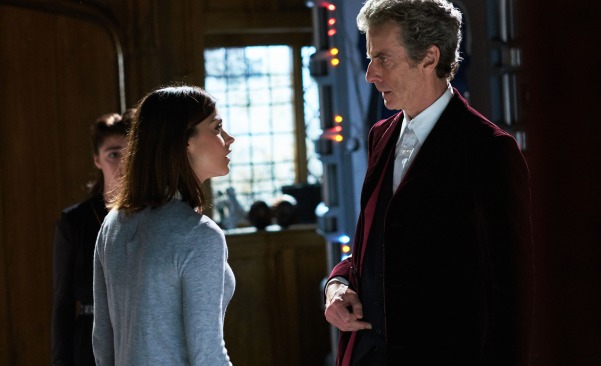 In previous years we at this humble website have reviewed each episode of the then new series of Doctor Who individually as they went out. However, in the spirit of the return of the two parters, it has been decided to review the two parters together as if they were one coherent story. However, as Face The Raven isn’t a two parter (though in the future, its status may change to that of the first part of a three parter) so we return to the previous format of reviewing stories as individual episodes.

Like Sleep No More, Face The Raven’s title captures the essence of the episode. Yet in contrast to last week’s dull, predictable and ridiculous (monsters made out of sleep dust!) story, Face The Raven not only quickens the pace but also the pulse of the viewer and heralds a return to form that we haven’t seen since Toby Whithouse’s knock out two parter.

Receiving a call from Rigsy of Flatline fame (Joivan Wade), The Doctor and Clara return to present day London to find that Rigsy had a strange tattoo on the back of his neck which is counting down to his own death. Horrified by this, the time travellers set out to find the perpetrator of Rigsy’s death sentence leading them to re-encounter Ashildr (Maisie Williams) who is now in charge of a secret alien refugee camp under London.

Sarah Dollard does something that hasn’t been seen in this series since the abovementioned two parter by Toby Whithouse and that is to put drama at the forefront of the episode. By setting a ticking clock running from almost the start, Dollard makes us care more as we know there is a finite time to find the conclusion to the problem they are tackling. This tension is further reinforced by the fact that the person is in danger, Rigsy is likeable and also has a young family making us empathise more and want to see a suitable conclusion. Another suitable trick that Dollard employs is the foreshadowing of Clara’s eventual demise; from the very first scene of the episode we see that she is continuing to take risks that The Doctor isn’t too happy with which eventually pays off by Clara taking on Rigsy’s death sentence.

Dollard also cleverly juggles humour, drama and tenderness throughout the story so it doesn’t feel too much like a one note episode. Particular kudos must go to her handling of Clara’s death; she imbues a sense of sensitivity into The Doctor and Clara’s final moments together while contrasting it with The Doctor’s deep anger at Ashildr for causing the situation. Dollard gives Capaldi some fantastically Biblical like language to employ and it is a delight to see him go at it with full force.

The acting in the episode is brilliant. Jenna Coleman, who has mainly spent this series in the shadows and barely appearing, is given a fantastic send off. Her determination to save Rigsy is palpable and her reaction to Ashildr’s betrayal is also well shown. However, the best thing about the episode is Clara’s ultimate sacrifice to save Rigsy. She shows a final coming to terms with her own time running away from the realities of life with The Doctor and also with her apprenticeship with him – she assumes the mantle of the hero which The Doctor had held before. Her final scenes are wonderfully filmed by director Justin Molotnikov and show off Coleman’s full acting range.

Capaldi also gets to demonstrate his acting chops; he is funny and dramatic, mainly in his final encounter with Ashildr in which his darkly worded threats against her if she crosses his path again are chilling to behold. Capaldi is at the top of his game as The Doctor and makes sure that we know it.

Overall, Face The Raven is a thumper of an episode. It brings Doctor Who back to the forefront of British drama with ingenuities in characterisation, music, acting and writing. Bring on the next episode if it keeps up the standards set by Dollard and co.