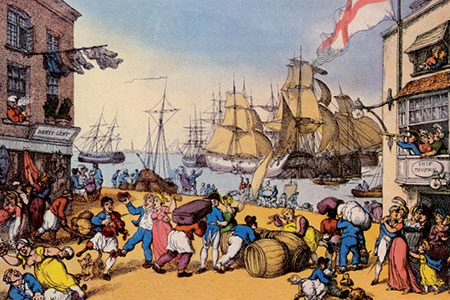 As the Napoleonic wars raged, what was life really like for those left at home? Award- winning social historian, Jenny Uglow reveals the colourful and turbulent everyday life of Georgian Britain through diaries, letters and records of farmers, bankers, aristocrats and mill- workers. Here, lost voices of ordinary people are combined with those figures from history that we know, from Austen and Byron to Turner and Constable. In These Times movingly tells the story of how real people really lived in one of the most momentous and exciting periods in history.

I first became aware of Jenny Uglow when reading her excellent account of the life of Thomas Bewick. Uglow’s book on Bewick fascinated me, not merely because of its brilliant portrayal of the life of Bewick and those around him but also because of the references, dotted throughout to book to one Joseph Barber, bookseller of Amen Corner and founder of Newcastle’s first Circulating Library. I am descended from Joseph and so Uglow’s references to him were fascinating to read and through the ingenuity of her writing, it made me equally interested in Bewick and the world which he inhabits.

Uglow’s latest offering, In These Times: Living in Britain through Napoleon’s Wars 1793 – 1815 we look at a much more expanded landscape; Britain during the twenty years in which it was at war with Revolutionary and later Napoleon’s France.

You would think that tackling such a large subject would be something that would make a book unwieldy and unapproachable. However, this is not the case. Uglow breaks the period down into sections, covering the lead up to war, the beginning, middle and end of the war.  By doing this, it instantly makes the book far more approachable. To further make the subject more palatable Uglow’s aim is to show how ordinary people where effected by the war. This means we get a much more human feel to the events that occur during the war. Instead of reading about far off fights in Egypt and Flanders we get to hear about what was happening and how. It makes the whole event of the war far more real and approachable.  Instead of being simply a military history of events that happened two hundred years ago in far off locations, this is a history of all of us; a history of Britain throughout an entire era. Yet even so, this does not get to the root of why the book is so brilliant; this is due to the way in which the people that populate its pages  are brought to life.

From sailors like John Nichols and Frances Austen to soldiers like Sir John Murray and William Harness to ordinary men and women like William Rowbottom and Mary Hardy to politicians such as William Pitt and Charles James Fox to caricaturists such as  Gillray and Cruikshank this book covers every aspect of British life and does so in a way that is entertaining and engaging. Uglow never makes the reader feel like they are outside or in another time to these people. She makes us feel like we know them; we could meet them in the street or outside a pub. They are not distant, unrelatable figures. They are people that we know because they are us. By showing us the most intimate correspondence of some of these people, we realize that though they are nearly constantly at war with France and her dominions for twenty years, they  felt the same things that we do. They were worried about bringing their children up in the right way; worried about taxes (particularly the newly invented “income tax);  worried about the threat of terrorism from home and abroad and worried about whether they would be able to live through the next day. We also get to see their hopes and dreams as well; the book manages to provide as much laughter and happy moments as it does provide introspective reflection.

Not only do we get a feel for people at home, Uglow also brings in how it felt fighting against Napoleon and his armies. The brutality of the war is shown in all its dark and foreboding essence. The full horror of war is presented in a stark and truly dreadful way. Not only do we get chance to read about soldiers writing their last letter to their families telling them all is well only for them to die days later. Uglow also brings in how some were desperate for glory and disappointed at not being able to take part in great historical events, such as Francis Austen who was so close to taking part in the battle of Trafalgar. Uglow expertly weaves the two strands together, that of the horror of war and that of the death or glory sentiments that some officers had. We get to experience both sides of how the men who went out to fight experienced war.

Overall, Uglow’s book is a testament to how, in some ways, British life has changed incredibly because of the Napoleonic wars but also how life has not changed at all. The story of Britain is still being written and as history continues to march forward, we are constantly looking back at the past to try and understand how our forebears lives and how their lives effect our own. Uglow’s book does that but it also shows that in many ways lives don’t change so radically because humanity has a habit of not changing. The people that fought Napoleon are in many ways the same people to fight against any cause that they believe in.

One response to “In These Times: Living in Britain through Napoleon’s Wars 1793 – 1815 Review”