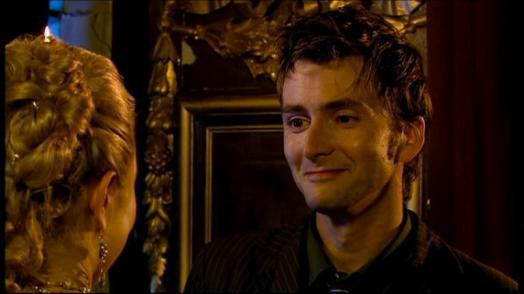 Reinette: What do monsters have nightmares about?

The Doctor, Rose and Mickey arrive on a spaceship in the 51st century and discover the crew have disappeared. All the ship’s power is being sent to create time windows to 18th century France. The ship seems to be stalking Madame du Pompadour. For some reason, the ship needs the head of Pompadour after her 34th birthday. The Doctor must save her before she ends up as another part of the ship.

David Tennant is brilliant in this episode, showing both energy and grace. His obvious love for Madame Pompadour is excellently depicted when he takes her death letter grimly. His obvious depression by her death is both truthful and poignant.  Earlier in the episode, his convincing “drunk” acting, meant to fool the Clockwork droid, worked well. Tennant’s first few episodes are and always will be gems.  This one more so, as it is a love story and Doctor Who does not normally embrace love stories.  As Tennant is the perfect boy next door type, it makes us wonder whether his endearing charms were the springboard for the plot.

Sophia Myles is compelling as Madame Pompadour. You have to watch her every movement as she mesmerises us with her beauty and grace.   Myles’ depiction of Pompadour makes us sit up and pay attention. This is one strong, intelligent, sexy woman who knows what she wants.  It is interesting that even though Pompadour lived a century before Queen Victoria, she is portrayed as being more modern than the Victoria we were introduced to in an earlier episode.  However, we must not forget that Pompadour is not from the same world as Rose, Mickey or The Doctor.   She is terrified when she crosses from Versailles to the spaceship that is stalking her. Myles plays that scene truthfully and we believe her fear.  From fear to steely cool, Madame Pompadour is not frightened when she is nearly decapitated by the clockwork robots. While everyone else is panicking she remains calm.   In other words, Myles’ Pompadour develops through the episode and only an actress of a certain calibre could have pulled this off as successfully as Myles. I take my hat off to her for playing one of the best female characters who has ever appeared in Doctor Who.   Now come on Steven, will she appear in the next series or not?

The clockwork droids are utterly stunning. If there was a competition for best dressed villain, then they would have to win.

In conclusion, “The Girl in The Fireplace” is one of the best Doctor Who stories of all time. It has action, adventure, romance, comedy and wit. The two stars of this story, David Tennant and Sophia Myles are incredible and sparkle wonderfully.