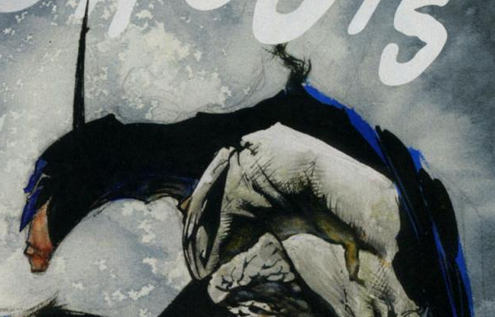 Following on from the previous instalment, the fantastic Voiceless we delve once more into the dark and sad world of the homeless, except this time we do so in a story that is less than truthful about homelessness and gets bogged down in some rather bizarre waters. In this edition we look at the disappointing Ghosts (Batman Confidential 40 -43).

Ghosts is unlike the previous story about homelessness we looked at as it tackles the issue in the completely wrong way. Instead of focusing on the main point of the story (ie  homelessness) it instead focuses on something that should be a subplot.

The story, while it is meant to resolve around a series of murders involving homeless people, instead is mainly about the relationship between Batman and a blind woman called Cassie.

Cassie runs the nearest soup kitchen for the homeless and is a friend of Gordon’s who knows about… stuff (it is never explained what her expertise is). Batman decides to ask her about the case, not because she serves the community but because of her expertise. She and Batman bond over the case but instead of cracking it, the story goes in circles. They meet, Batman gets injured and she looks after him. Next they meet again, Batman gets injured and she looks after him. The plot seems to halt somewhere near the beginning of the first part and stalls until the middle of part three before once more stopping until it concludes in Part Four. The story never seems to move forward, simply going round and round in circle until it ends.

Further problems lie in that the story could actually be good. We get some nice scenes with Batman lamenting on whether or not he actually does good.  Meanwhile, the “villain” behind it all appears to taunt him by saying that his frightening of criminals is just as bad as the terror that was brought to him at a young age.

This is dealt with so clumsily and needlessly connected to Cassie that is derails the entire story. Instead of focussing on the two themes of homelessness and Batman’s inner torment over whether what he is doing is right or wrong, the author and artist Sam Keith messes it all up by focussing on Cassie, a character that more or less represents a ditzy sit com character than any form of actually interesting person. Batman refers to her as “smart, brave and likeable” yet we never see her display any particular evidence of any of these attributes. Instead of connecting the murders to the unnecessary Cassie, Keith could have simply made the analogy between the homelessness of the victims and Batman’s own feeling of helplessness and abandonment that he felt when he was an orphaned boy creating a much more powerful story.

The artwork that features in the story goes from the ridiculous to the sublime. Keith is a great artist and has in the past done some excellent illustrations. However, while some of the painted work in the story is beautiful (particular examples include Batman standing alone while a breeze of smog envelopes him) some of the other illustrations are simply terrible. Commissioner Gordon zig zags between a bizarre early Picasso to a cartoon version of David Tennant. Meanwhile, poor Alfred resembles a character that would not look out of place in Coraline, as he appears to have not eyes but buttons.

Ghosts is an example of a lost opportunity. While it does feature some great ideas and some interesting artwork it falls down in both regards simply because it doesn’t have enough editing involved with it. If the story was more streamlined and some other pieces of art were used in certain sections than the story would be much better.

Next Time we look at a story from the future as we venture into the world of Batman Beyond, in “In Blackest Day”.