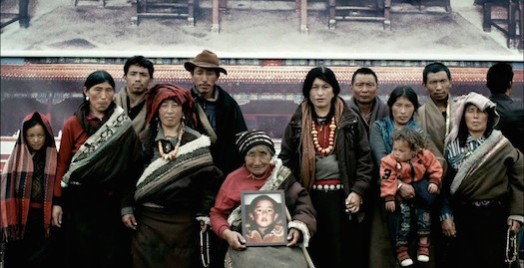 Butter Lamp has been nominated for the 87th Academy Awards in the category of best Short Live Action Film. The film by astounding Beijing born director Hu Wei is competing against five other films for the Oscar; hopefully it will receive it.

A young photographer and his assistant suggest to Tibetan nomads that they have their picture taken.  Against diverse backgrounds, families appear to the photographer.  Through these shots, the photographer weaves unique links with each of the various villagers.

Butter Lamp is one of the best films I’ve ever seen. Not “best short films I’ve ever seen”, no one of the best. It has a powerful and subversive message that is so brilliant in its simplicity that it will astound you. As the synopsis says it is about a young photographer and his assistant as they photograph Tibetan nomads. However, there is something much deeper within the film – it explores the idea of propaganda and how it can manipulate the people who are fed it for their entire lives.

The film slides gloriously from scenes to screen by the use of a pull down backdrop. This changes throughout the film as the characters react to it in a positive or negative way. Each different backdrop has a specific message which director Hu Wei does perfectly. Though the angle of the camera remains constant throughout the film, Wei manages to cause it to change and flow in a way that not many directors can do. Wei has a Poliakoff type way with the camera, having such control over it that it becomes a literal extension of his own vision.

While the camera remains still throughout most of the film, Wei’s use of the constant change of characters and backdrop mean that we are able to get a sense of the shift going through Tibetan society and the changes that it faces.

This is particularly depicted in a scene in which an elderly lady is taken to be photographed and the backdrop that is chosen for her is Potala Palace – the former home of the Dalai Lama and a place the elderly woman has always wanted to visit. As soon as the picture appears behind her, she can’t take her eyes off it. While the young photographer tries to get her to look at the camera so that he can take her picture, she ignores him because she is so transfixed by the image of the Palace. This lack of ability to break away from a past that is not only lost but deliberately stamped out by the Chinese government is one of the reasons the film is so powerful. It manages to sum up emotions that are universal but also very connected with the place it is set. It is only once the backdrop has been changed that the women turns around so that she can be photographed.  The woman wants to visit this place that is so important to her and so seeing just an image of it means she can’t look away or let go of it.

As I mentioned earlier in the review, Wei’s directing is fantastic. The cuts between shots are so clear and crisp that it puts many contemporary movies to shame. Wei doesn’t attempt too much clever camera trickery; he simply lets the story tell itself using the camera. He creates a world that is littered with wonderful metaphors; one particularly nice one is the image of Disney World being covered by the image of the Potala Palace.

A western audience may not fully understand all the cultural imagery in the film, however, even if you don’t get everything that is being suggested, it is still a wonderful experience to see it. In fact, it is a master class in directing by a director that will hopefully be heard of more after the great recognition this film has received. And well it deserves that recognition as it is one of the best films made in recent years.