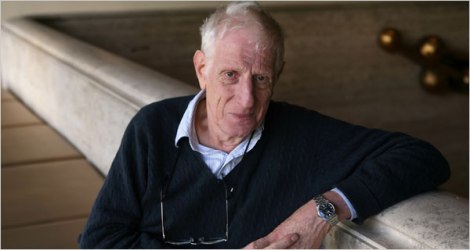 On Thursday, the 19th of May I took my seat at the Hay on Wye festival for a discussion about his career, life and works. Miller, a highly respected director of both play and opera began his performing life in Beyond The Fringe. Since then he has worked on many projects varying from Othello to Rigoletto.

Miller is also well known for being lampooned and I can say from encountering him, rightly so. A character based on Miller appear in The Beatles 1968 film “Yellow Submarine” who describes himself as “ an eminent physicist, polyglot classicist, prize-winning botanist, hard-biting satirist, talented pianist, good dentist too”. Famously, Miller would frequently appear on Spitting Image which parodied his “talking bollocks” and spending his time doing every single job possible and cocking every single one of them up. Maybe Miller has changed since the ‘80s but he certainly did not appear like that at Hay. The truth is far more amusing.

Miller appeared on stage to be interviewed by Revel Guest (yes, that is her real name) an old chum of his and also chair of the Hay Festival. What a piece of serendipity! They began by talking about Miller’s time preforming Beyond The Fringe at Edinburgh and then London before ending up in New York. Guest’s questions were simple enough and the event seemed to be going well. Miller used the topic of Beyond The Fringe to springboard onto explaining to the audience in depth “what a joke was” and was determined to show off how bally clever he was for being able to understand the comic misunderstanding. Guest then brought up the question of swearing in comedy and how she didn’t like it. Miller used this to go onto how much he loved the double entendre and listened to The Goon Show every day on BBC Radio Four Extra (what this had to do with swearing in comedy will remain one of the great mysteries of our times).

He then explained for the poor audience how once upon a time you could put f-ck and people would be able to understand what word you were referring to before promptly saying the word just in case you didn’t understand what the word was. Guest, slightly replied by this (“You don’t get this sort of language in the Pony Club!” (must have been one of her thoughts) moved on to the time Miller spent in New York working on Beyond The Fringe and other publications.

Slowly but surely the conversation (guided by Miller) changed to the subject of neuropsychology. Now, before Miller had done Beyond The Fringe he had studied neuropsychology and had become a certified Doctor. By the time Beyond The Fringe got to New York, Miller was only still dabbling in the subject. When he returned to London at the end of the tour he had given up on this particular path. Or so he said.

In 1978, he made the thirteen part series “The Body In Question” which Miller, during the discussion at least, seemed to give more weight to than to his contributions to Beyond The Fringe. Miller seemed obsessed with not only neuropsychology but “the trivial thing”. At one point, he stated, completely seriously that “I’m only interested in the trivial things. Nothing else interests me.” Interestingly enough, it could be suggested that Miller seems to believe neuropsychology is one of the “trivial things”.

In his book, On Further Reflection: 60 years of Jonathan Miller released to coincide with the event, the largest section “Paying Attention” (which takes up pages 141 to 179) focuses on Miller talking about action, reactions and how they work with neuropsychology. The section on the theatre meanwhile lasts eleven pages. Another section, on his TV series “The Body In Question” lasts forty odd pages. Miller seems to have a bizarre obsession with being a doctor again while seeming to scoff the establishment that gives him his daily decanta. He bluntly said during the discussion “I haven’t visited the theatre in twenty years” while also plugging his new production of Romeo and Juliet. This was a fascinating revelation, seeing as Miller said to The Telegraph last year that his production of Rutherford and Son “was likely to be his last”.

After scoffing the theatre, Miller went on to scoff religion essentially saying that “all religion has done is bad”. Aside from this being a gross sweeping statement, Miller seemed to overlook the fact that the great bard himself, Shakespeare constantly refers to not only religion but also uses religious imagery. Luckily, Miller has never directed one of Shakespeare’s plays, or wrote essays on them! Oh wait, he has.

Guest had by now given up and essentially has given Miller full reign to drone on about what he wanted to. She suggested opening up the questions to the audience before finishing on his opera work. Miller became even more long winded when the questions were about neuropsychology (as we have learned is his favourite subject) and cut short any discussion about his theatre work. When one audience member asked whether Miller had ever been influenced by any other director Miller replied “No, I have never been influenced by anyone, I’m not interested in other directors, just in the trivial things”. Miller ended the show by spending a good twenty minutes answering a question about babies and neuropsychology, nicely side stepping Guest’s prepared questions of the Opera.

Miller began his career as satirising the establishment, particularly the long winded ministers of Macmillan’s government in Beyond The Fringe. Bizarrely, he has now become one of them.