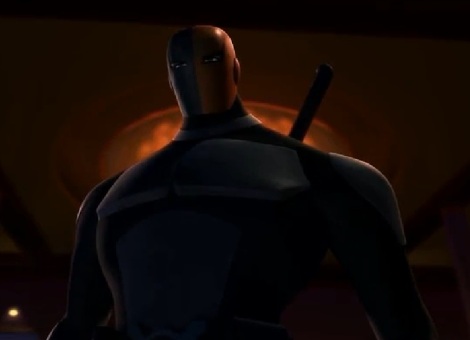 Desperate to rid the city of Batman and become Mayor of Gotham, Harvey Dent allies with Anarky, who recruits a new “hero” to take Batman’s place: the newest member of the Special Crimes Unit, Deathstroke.

For the past few episodes we haven’t seen the outcome of Dent’s deal with Anakry and seen no explanation why The Dark Knight hasn’t gone after him. Finally we get one. Batman appears to know about Dent and Anarky’s alliance and we also see that Dent has become frustrated with Anarky not helping him get Batman. Anarky therefore calls in Deathstroke to help him take Batman down. Deathstoke’s appearance is brilliantly done in the episode with him crashing into it head first. He is given agency and power which means that you can’t take your eyes off him.

The heart of the episode is the definition of what a Hero is (referenced in the title) and if a hero can be broken. Deathstroke sees being a hero as a weakness and one that will make it easier for him to take down Batman.  Anarky sees being a hero as something that should be parodied and ridiculed and that in the end given the right push we will all abandon our morals and descend into Anarky (rather like The Joker in The Dark Knight). Batman himself sees being a hero as his duty, not only to stop Deathstroke but to prove Dent wrong and that he is helping Gotham. The episode gives an interesting balancing act and never says outright who is right merely putting their cases forward and wondering how the audience will react.

The episode is probably the best in the series so far, it manages to follow a cohesive storyline, give action and drama as well as creating a moral dilemma which lies at the heart of Batman, all in 20 minutes. Few episodes of the series manage to do that.  If you are undecided as to whether you like Beware The Batman or not I suggest you watch this episode as it will decide for you.