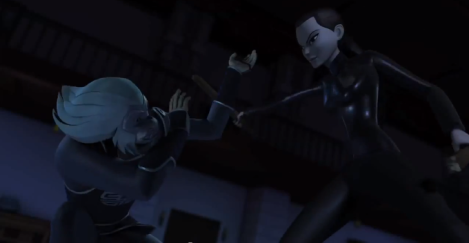 Introducing the prototype of his newest product to the entire world – the Ion Cortex, a powerful device capable of solving the world’s energy crisis – Bruce Wayne hires brilliant scientist Dr. Jason Burr to work on the project. The announcement also draws the attention of one of the most dangerous groups in the world – the League of Assassins. When one of the League’s deadly assassins called Silver Monkey attacks Wayne Manor to kidnap Dr. Burr while Batman’s in Gotham, it’s up to Alfred and Katana to keep the assassin at bay until Batman returns. Katana is masked and armed and ready for the task with her legendary weapon the Soultaker Sword (a sacred weapon she stole from the infamous League of Assassins back when she used to work for them).

The story could only work in the context of the modern age. With billions being spent on trying to find alternative methods of energy to meet our growing demand, a story about a machine that could solve it and connect the world’s energy may be near the realms of science fiction but it isn’t quite there. New technology is being developed all the time and 40 years ago the internet would have seemed impossible. However, the idea of the Ion Cortex is largely overlooked mainly because it is really just a plot device to introduce The League of Assassins and develop the story arc.

The story begins with Bruce Wayne talking to a packed audience about the Ion Cortex a machine that will change the world’s energy needs. He introduces Dr Jason Burr the man behind the Ion Cortex. However, they are attacked by unknown Ninjas. Katana almost kills one of the assassins but is stopped by Batman. Dr Burr is then invited back to Wayne Manor so that Bruce can keep a closer eye on him.

After this, the story is a general run of the mill dash to save someone/something story with Batman having to outwit his own security measures to get back into the Manor and save Burr from the League of Assassins.

It is a simple enough story and the occasional comedy between the love struck Dr Burr and Katana keeps it fresh enough. It wouldn’t be the best story to watch as a standalone as you need to have seen what has happened previously in the series to understand anything that is going on in this episode.

Beware The Batman: Safe is a jolly good action romp and adds more depth to Katana’s back story (for instance we learn she was a member of the League of Shadows) and introduces the mysterious League of Assassins to the series but really it is nothing more than a nice action packed story to enjoy when you have a spare 20 minutes.