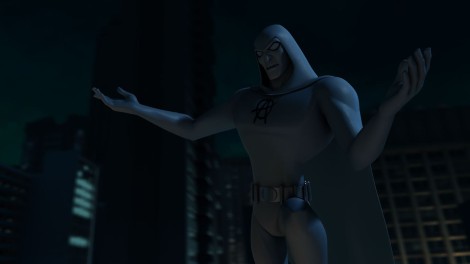 A new criminal mastermind has arrived to challenge Batman for control of the Streets of Gotham City: Anarky. Resembling a ghost image of Batman, Anarky prides himself on his brilliance and intends to prove it to Batman by manipulating a pair of unsuspecting street pawns named Daedalus and Junkyard Dog to do his bidding. But Anarky’s real plan is far more devastating… seeking to create a disaster seen by all of Gotham and proving once and for all that even the great Batman is powerless to protect his fair city from the clutches of Anarky.

Soon, however he is called away to fulfil his duties as Batman. During this he encounters Daedalus and Junkyard Dog two street “artists” bent on creating devastation. The duo is funny enough to provide the comic relief in between more weighty dramatic scenes. Batman ties them up but they are soon released by the villain of this episode, Anarky. Anarky enlists them to help him in his war on society and order by giving them instruments to create disorder.

After some fights and interruptions to his plans, Anarky finally faces The Dark Knight in the climax of the story.

Without The Dark Knight this version of Anarky would probably not be the way he is. Though obviously heavily influenced by the comics, Anarky also feels like a more refined Heath Ledger joker. Both characters have the same aims to bring chaos to Gotham and through that chaos prove that they are as superior in intellect to Batman.

Due to the fact that Anakry has no agenda, like the Ledger Joker, this makes him unlike the villains that Batman has faced previously in this series and therefore more dangerous. Magpie and Professor Pyg wanted something out of their misdeeds, Anarky doesn’t.  This makes him a much more dangerous opponent for Batman as he cannot reason with him and therefore he has to stop him more throughout by manoeuvring him than through simple brute force. This makes him very interesting and marks his debut episode out as pretty unique in comparison to the other episodes in the series. . .

The development of the story arc surrounding Katania deepens in this episode as we see The Soul Taker sword for the first time. The arc is brilliant throughout this series as it isn’t too oppressive. It only becomes crucial to the plot in an episode in which it is the focus of the villain’s plans (like the next episode).  Unlike with other series it is more of a connecting thread rather than being too much of a crutch, meaning that you have to spend hours re watching episodes to understand what the writing is trying to tell you.

Tests is a great introduction for Anarky and also another brilliant episode in the continuing saga of the Beware The Batman series.