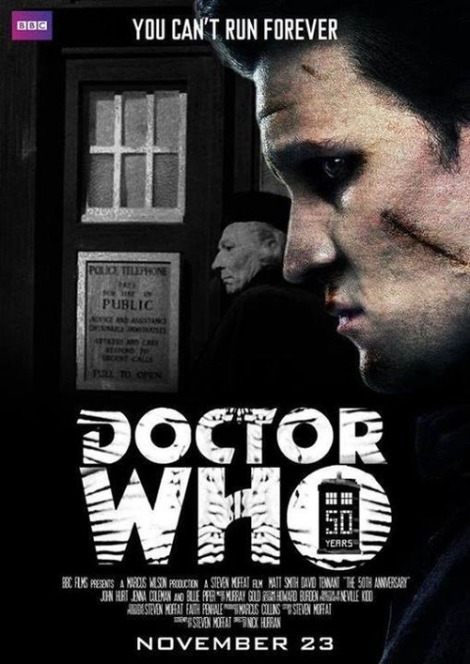 “This fall, the Doctor will face his darkest day: Himself.”

“I’ve had many faces,” Smith’s Doctor says as the trailer opens. “Many lives. I don’t admit to all of them. There’s one life I’ve tried very hard to forget.”

Forgetting his past will be impossible, though, for it seems that together, the Doctors will have to face their greatest foe, the Daleks. Lots of Daleks are seen burning and dying in the remains of Gallifrey as Hurt’s Doctor strides through an proclaims ” “Great men are forged in fire.” Next we see The Tenth Doctor in his TARDIS (Presumably filmed on a day when the Doctor Who Experience was closed?) shouting “Alony -s!” with The Eleventh Doctor also in his TARDIS saying “Geronimo!”
Next is the first appearance of Billie Piper of Rose who says “the moment is coming” which Hurt’s Doctor seems prepared for. We then see The Tenth and Eleventh Doctors comparing screwdrivers with Tennant seemingly envious of his successors larger device (oih! No rudeness here, thank you very much). The TARDIS is then seen dangling over Trafalgar Square with Smith about to fall out. Back to Smith in the TARDIS, proclaiming “I remember this. I pretty much remember.” Then Smith, Hurt and Tennant in the TARDIS. Tennant comments on the new design, echoing Patrick Troughton, ” “Oh, you’ve redecorated. I don’t like it.” A title appears: “This fall, the Doctor will face his darkest day: Himself.”
Zygons then appear bursting out of cases (possibly something similar to their technology seen in Terror of The Zygons?) before the Daleks burst in and get beaten up.
As the trailer concludes, somebody says “I’m looking for the Doctor,” as the camera pans around to show all three of them. Tennant simply shrugs and says “Well, you’ve certainly come to the right place.”[Source: Doctor Who TV and io9]
With the Daleks appearing it seems likely that Zygon creator Robert Banks Stewart was probably right about the Cybermen appearing as well. The trailer doesn’t show what is going on at Totter’s Road or the scenes with Elizabeth The First. We will have to wait to see how they fit in.
UPDATE: A picture from the trailer has been leaked online and appears to show Hurt’s Doctor striding through fog (Gallifrey, perhaps?)