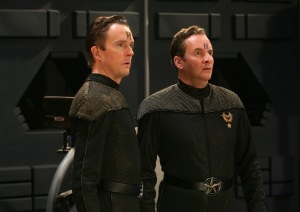 Rimmer: “Kryten, you have a real gift. You make things that are really, really complicated sound more complicated.”

The Red Dwarf team find an abandoned spaceship on the outskirts of Space, whilst investigating, they discover a distress call to the ship from Rimmer’s long lost brother, Howard; however, Howard is now a captain. Before Rimmer can save his brother he must finally become an officer and to do that he has to finally pass a test which he has failed nine times.

Red Dwarf was last on British television back in 2009. Back to Earth had rather mixed reviews to say the least. It was seen to be too serious, too complicated and nothing like “The old Red Dwarf”. Opinions seem to have changed since then. Red Dwarf triumphantly returned to our screens and it was very much like the old Red Dwarf. Indeed, it was the same old funny Red Dwarf from around series one to three. However, I have to admit to being a tad disappointed that it is almost like Red Dwarf has returned to factory setting. Everything which had been gained in previous seasons seems to have been swept aside. Indeed the drama and the depth of the characters seems to be gone. Trojan is a good episode but sometimes it does feel that the laughter is canned laughter. It seems that the writer, Doug Nayler thinks he has to prompt the audience to laugh; this is unnecessary and rather patronising. However, apart from that, Trojan is a good episode with funny lines and a good but simple plot. However, I do hope that episodes do not remain this simple as the characters need to develop.

Chris Barrie is brilliant as a panicking, Arnold Rimmer when his brother returns as a captain. Another great scene is when Rimmer is revising for his officer’s examination and Lister, The Cat and Kryten all know the answer to the final question. The arrogance and then frustration in this scene is played particularly well by Barrie.  I hope Barrie can keep up the good work in face of rather underdeveloped character motivations and the horrible studio audience laughter.

All in all, Trojan was a good episode. It had faults as I have stated above but they are faults that could have been avoided by a good editor. Hopefully, Red Dwarf can become as good as it once was.

NEXT TIME ON RED DWARF: