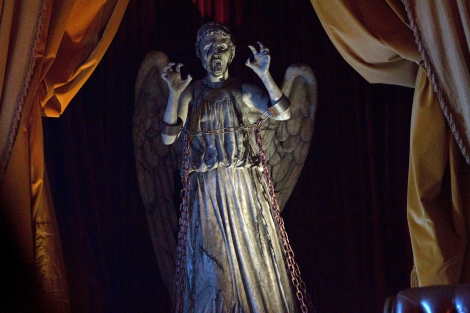 The Doctor, Amy and Rory arrive in New York only to find that the whole city has been taken over by the Weeping Angels. Rory soon gets zapped back in time to 1938, where he meets his daughter, River Song who is also investigating the Angels. The Doctor and Amy must race across time and space to find Rory before The Angels Take Manhattan.

The Angels Take Manhattan opened excellently with lots of atmosphere building and the Angels were creepy for the first time since Blink.  The idea of the detective seeing his older self was brilliant and slowly begins to set the scene, by building up the drama.  The rather shocking appearance of the Statue of Liberty leads boldly into the title sequence. The picnic scene at the beginning was lovely and shows the chemistry between the Ponds and The Doctor. I felt, however that the cherubs, though very creepy seemed a bit too much, especially with the Statue of Liberty being an Angel as well.  However, the beginning was mostly atmospheric, tense and absorbing then slowly, like a deflating balloon, the atmosphere farts off across the Manhattan skyline never to be recaptured until the very end of the episode.

The twist that River was Melody Malone was very good but a tad predictable. The scene in which Rory sees his older self-die was well played by both  Darvill and Gillan. The scene with Rory and Amy on the rooftop about to jump was fantastically played though maybe not suited to a show which Moffat says the whole family watches. They jump off the roof and live?! This is not setting the best example, Moffat. The fact that Rory is sent back in time, again by a Weeping Angel that comes from nowhere seems terribly gimmicky because it is creating a twist for the sake of it. The scene after Rory is sent back in time and Amy wants to be with him is brilliantly played by Smith, Gillan and Kingston. The ending is rushed, though this is made up for by the tie in scene with The Eleventh Hour which neatly ends Amy and Rory’s arc.

Normally, I only look at one star performance in an episode but since this is the Ponds’ final episode, I feel that the two star performances should be Karen Gillan’s and Arthur Darvill’s. Even though, like I said the rooftop scene is inappropriate for Doctor Who because unlike The Doctor,  Amy and Rory are mortals and it is difficult for children of a certain age to distinguish between reality and fantasy.  When they see two human beings jump from a very high building and not even be hurt; it is irresponsible television.  However, Gillan and Darvill play the scene to its maximum emotional level. Gillan also excels in the scene where she wants to be with Rory again, even if it means being sent back in time.

All in all, The Angels Take Manhattan had the potential to be a great episode but unfortunately like Rory and Amy it dive bombed down  but unlike them it recovered at the end.  Although it was Steven Moffat’s best Doctor Who script since The Eleventh Hour, next time I’m hoping for an episode which reaches the expectations I felt whilst watching the opening of The Angels Take Manhattan.

Will return at Christmas