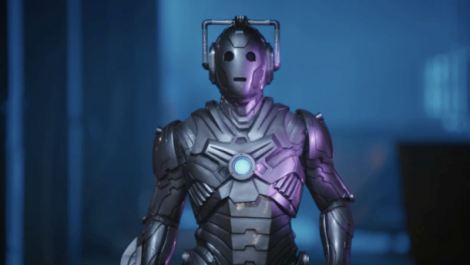 The point of this article is to try to make a definitive guide to the history of the  Cybermen. It is a troubled history and in some parts complicated but it is an interesting one.

Centuries ago, the Earth’s twin planet Mondas floated away from our galaxy and began to drift through space. The planet became known as Marinus (as seen in The Keys of Marinus) which The First Doctor visited briefly. Over time the Voord (who it seems invaded Marinus.)  began to slowly evolve into Cybermen (DWM comic strip The World Shapers). The Sixth Doctor, Peri and Jamie destroyed the Voords attempts to become Cybermen. Jamie sacrificed himself during this adventure though it was to no avail.  The Fifth Doctor and Nyssa came to Mondas several centuries later, (The planet had rediscovered it old name.) where the Mondasions had begun once more to experiment with cybernetics. The Fifth Doctor and Nyssa left the planet to its fate. By the time The First Doctor had “his” first encounter, several version of the Cybermen existed. The MondoCybermen (as we shall call them from now onwards) invaded the Earth (1986. I’m mentioning it now because it will be important later…)  in an attempt to such it dry. The First Doctor stopped them but in the process had his first regeneration. 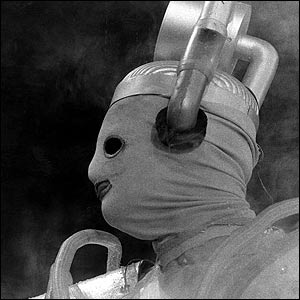 It is after this point the history become more complicated.  I shall go along the lines of linear history so that it is too to confusing. The first known encounter the Cybermen is 1861 ( The Next Doctor ) where The Tenth Doctor encounters Cybermen who have somehow, surived the events of Doomsday/Army of Ghosts and have traveled back in time. They plan to use a ship called a CyberKing (Why have we not seen this battle ship before, if The Doctor has?) to destroy Victorian London and take it for themselves. The Tenth Doctor defeats them by sending them into the void. We next encounter the Cybermen in 1970 ( The Invasion ) where they are planning once more to take over the Earth. The Second Doctor, Jamie and Zoe intervene and stop them. Interestingly, these Cybermen have only encounter this Doctor (we presume they don’t know about regeneration.) on somewhere called “Planet 14”. Seeing as these Cybermen are similar in design to the Voga Cybermen maybe they are survivors of the Voga incident? So that means that they know about regeneration? Not so. The big chief Cyber computer thingy knows about The Doctor and two companions but he does not actually see them. The Doctor has two companions in Revenge (Sarah and Harry.) so most likely they are the same Cybermen. Though the Cybermen in Revenge know about The Doctor. Unless, due to the fact the travel back in time to the 70s, they forget their previous encounter with The Fourth Doctor ?

We next encounter the Cybermen in 1986 (Attack of The Cybermen). A group of Cybermen who I shall refer to as Neo Cybermen because of their design. These Cybermen know of the existence of the Mondasian Cybermen (The Tenth Planet, Spare Parts.) and have traveled back in time to avert the destruction of Mondas. So, hang on. These Cybermen A) know about regeneration (Because the recognise The Sixth Doctor as being The Doctor and the also know he has changed his appearance.) B) Know that Mondas has been destroyed and C) know about the event of Tomb of The Cybermen. How could they know though? How are they somehow knowledgeable about previous Cybermen history? Have they been in contact with other versions of The Cybermen? Hmmm. We shall part company with these Cybermen for the moment and go forth to the next Cybermen attack on Earth. The next invasion of Earth is only two years later. These Cybermen are slightly different to the Cybermen we see in Attack of The Cybermen, but are basically the same design. Their plan is to invade the Earth and turn it into the New Mondas (Guess the Telos plan didn’t work out lads…) aswell as capturing the slightly odd Timelord weapon, Nemesis. They are ultimately defeated by The Seventh Doctor who blows them up. So I guess this is the end of the Cybermen? Fat chance. We next hear of the Cybermen in 2006 when they come through a rift  int he fabric of the universe created by the Daleks.  I won’t go into the details of the previous appearance of the Cybermen in that series as it will mean everything will get even more flipping confusing then it is already. 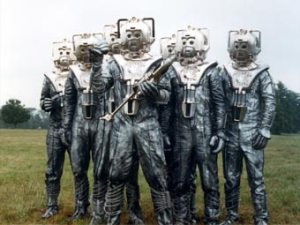 The Cybermen’s plan this time is to take over this Earth, seeing as they think The Doctor won’t be here. Tssk, what are they like? Anyway, when they meet up with The Daleks they seems to have the idea that they will be able to join forces and conquer the Earth. The Daleks disagree and a civil war starts. which is ultimately ended by The Tenth Doctor sending both of them into the void. Some of the Cybermen escape (having being built here so not being effected by The Doctor’s “flawless” plan.) and travel back to 1879 where the Tenth Doctor will later meet them. The Tenth Doctor encounters the Cybermen from the  parallel universe once more (DWQR Made of Steel) in which he and Martha Jones defeat another bunch of Cybermen who were created in this world rather than the parallel world (I did say his plan was “flawless” didn’t I?) and who are trying to rebuild their numbers. We next encounter the Cybermen frozen in the Artic in the year 2011. The Eleventh Doctor and Amy discover the Cybermen hidden in ice caves terrorizing the local archaeologists. The only trouble with this story is that, in The Pandorica Opens Amy does not remember the Cybermen. This story is set before The Pandorica Opens so why does she not know them? Very odd. I have placed The Pandorica Opens/The Big Bang story here in my timeline for a reason. You shall see why now. Because the events of The Pandorica Opens/The Big Bang happen in a timeframe that does not exist and that only the people associated with the event remember it, my theory is the Cybermen The Eleventh Doctor encounters in 2011 in Colchester (Closing Time) are fragments from that previous Universe. After the rebooting of the Universe by The Doctor, the Cybermen of the Pandorica end up crashing in Colchester in 2011.

We next meet the Cybermen in the mid 21st century. I shall call these Cybermen “Telonian” Cybermen, as they have strong links with Telos. We first see the invading the Wheel, a scientific space station (The Wheel in Space) before attacking a base on the Moon in the year 2070 (The Moonbase) before  freezing themselves in ice on the planet Telos (Tomb of The Cybermen).  They are all mainly encountered by The Second Doctor. These Cybermen similar to the most recent versions of the Cybermen seem to be able to travel through time or are quite long-lived. Their tomb is found by the Neon Cybermen, (Attack of The Cybermen) before they are all updated including their Controller to the new Neon design. Sometime after the events of Attack, The Fifth Doctor encounters the same breed of Cybermen trying to destory the Earth so they can have control over the galaxy. It seems that most of this Cybermen escape, which leads to an interesting theory (more about it later). We next meet the Cybermen trying to destroy the planet of Gold (Or Vogo). This time they seem to be very similar to the ones we see in The Invasion (we according to my theory, is because they are.) and like previous Cybermen, the Neon Cybermen in particular are very susceptible to Gold. This seems to be a traight in most Cybermen with the exception of the new breed though it has yet to be proven they are not allergic to the stuff.  The Cybus Cybermen are alive  in the 51st Century are monitoring Demon’s Run (A Good Man Goes To War). It is only a brief appearance but it shows us that the Cybermen are still kicking even after their apparent death in the 29th century.

Now, the theory I mentioned earlier is this. The Cybermen we see without the famous C chest logo are they same Cybermen that escaped the events of Earthshock. Which of course means that the Cybermen of Silver Nemesis and Attack are earlier model who were refined untill the events of Earthshock, when after escaping the destruction of their ship they upgraded their appearance to match the image above.  However the Cyberman decided that their appearance was “illogical” and fallible. Scanning through time they discovered the last remnants of the Cybermen that battled the Human Empire during The Cyber Wars. They inherit the Revenge Cybermen’s strengths but also their weakness. When the 11th Doctor and Clara Oswald arrive in the far future (DW: Nightmare in Silver) they encounter this new brand of Cybermen: They retain elements from both the Cybus Cybermen and the Revenge Cybermen. The Doctor and co eventually managed to destroy this new Cyber race before it has even begun. Or so it seems…

I hope you have enjoyed my little saunter through the Cybermen’s history. I think in my mind I have finally put to rest the mad continuity of the Cybermen. Or I’ve opened a bigger can of worms…