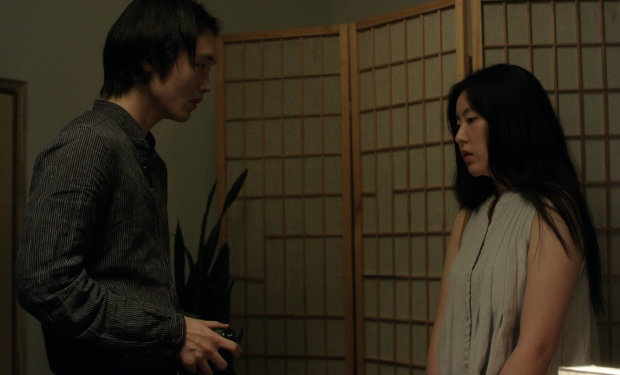 Hi Christina, thanks for agreeing to this interview. The first question I’d like to ask is could you explain the premise of Mirror for our readers?

Mirror is about a Korean tailor named Yeona who has a severe scar on her face. She decides to seek plastic surgery at a black market hospital in Queens, New York to remove her scar, but finds herself conflicted when the hospital urges her to completely remake her face. Ultimately, Yeona is forced to question what can or cannot be repaired by going under the knife.

Was it important that the film highlighted not only the pressures women face to live up to a particular beauty standard but also the differences between beauty in the east and west?

It was important to show that whether it’s east or west, different languages or cultures, the constant pressure of women’s beauty standards exists all over the world. In Korea, the ideal beauty standard is somewhat narrower because of the ethnically homogeneous population. Very thin women with fair skin, small faces, and large eyes – the K-pop image – is generally what is idealized as beautiful. Beauty is valued so highly in Korea that it’s common for young teenagers to get small procedures done and for one’s attractiveness to be openly pointed out as a merit of worth. I think it’s every woman’s choice to do what she wants to her body, but it was important for me to really question these damaging societal norms.

How well do you think the modern film industry portrays the pressure over appearance women feel in films?

Not very well, especially in showing the nuances of how insecurities in physical appearance can really range. Even if it doesn’t manifest as something as severe as body dysmorphia, the pressure can feel like a weight on someone’s shoulders that affects one’s self-esteem every day. What I’ve noticed is that content written and developed by women tends to address the topic much more.

How much of the pressure women feel over their appearance do you think is a result of the media?

We are inundated from a young age by unrealistic images of beautiful people, and this can be deeply, even subconsciously detrimental to our views of yourself. And not only is it a boring choice to cast the same types of talent in media, but it also doesn’t give wider representation to viewers who are positively impacted by it. When young women grow up not seeing images of people who look like themselves in the media, they subconsciously begin to see themselves outside what is considered beautiful. There is so much power in representation.

The film eloquently portrays the horror of backstreet cosmetic surgery, what research did you do about this subject in preparation for making the film?

I read articles on it and came to understand how dangerous and widespread it truly is. Despite the risks and lack of credentials of these surgeons, it continues to be popular in many places. I became aware of how some women become desperate enough to risk painfully botched procedures, even to the point of losing their lives. It shows just how immense the pressure of beauty is for women who regardless of being able to afford surgery, feel like they have no other option.

How do you think coronavirus will impact the film industry?

It has definitely taken a drastic toll. Productions that have started up are being forced to tell stories in a more stripped down way with fewer crew and cast members. There may be more emphasis on health and safety as well, which is the one positive that might come from it. Also, since audiences are not going to theaters, streaming platforms will have the upper hand.

We cast from a very small pool because we were specifically looking for New York based Korean actors who were fluent in Korean. Initially it was difficult because we were scouring acting databases and connections for options, but we were really impressed with the talent we got at auditions, even if we didn’t have as many actors as usual. We narrowed down our choices to a few each for the roles of Yeona and Joonsuk, and soon cast Spring Kim and Taeho Kwak for the lead roles. Both had an incredible ability to embody the characters from the start.

What was the filming process for the film like?

Mirror was made as part of my studies at Columbia University’s graduate film program, so our crew was comprised of mostly students as well as other New York based independent film crew. The production was only possible with the help of many fellow filmmaker friends. We shot for just over three days, so with the number of locations it was quite an intense schedule. At some points during the day, I had cut down my shot list and follow my instinct on the spot, which was a great challenge for me as a director. It was ultimately an incredible learning experience. My producer, Jungyoon Kim, is a graduate of Columbia’s MFA Creative Producing program and was there from beginning to end to help guide the production.

It has been more positive than we could have expected! We have so far been accepted to the Los Angeles Asian Pacific Film Festival, New York Shorts International Film Festival, Woods Hole FIlm Festival, and more. Several viewers have told me that they were able to relate to Yeona’s insecurity and deep desire to appear different at some point in their lives. The film is important to me because it does come from a personal place – I’ve felt those emotions, so it means a lot to know that others have been able to feel a connection to the film.

The path to self-acceptance is isolating and painful. I hope audiences can find deeper understanding through Yeona’s journey and all the darkness, yearning, and growth that comes with it. One day, Yeona might very well get surgery to remove her scar if it’s what she wants, but it will be on her own terms and hopefully after she’s found more peace within herself.

I’m currently in pre-production for my next short film, which tells the story of a Korean Adoptee from America who searches for her birth mother in Korea. It explores similar themes of identity, trauma, and alienation in the form of a mystery/slow-burn thriller. Our project won the prestigious Katharina Otto-Bernstein short film grant and will shoot in South Korea next year. At the same time, I’m writing and developing some very exciting feature scripts that I hope to be able to make in the near future.

With thanks to Christina.