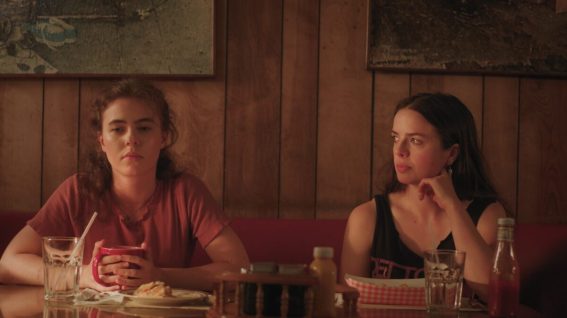 Hi Xinyi, thank you for agreeing to this interview. Firstly, I’d like to ask could you explain the premise behind Kindling?

The premise behind Kindling is the re connection between two friends who had a fight before that never got resolved. They have to resolve this issue because of how close they are—one has only the other when she needs someone to accompany her to get an abortion. This process is bound to be hard and burning because it’s part of growing up.

The title “Kindling” is a description of the two women’s relationship—the emotions between the two are so strong that when the fire burns, they may either hit it off or hurt themselves.

The film deals with important questions to do with the way women feel they fit into society; how well do you think media presents the friendships women have with one another?

I don’t think the representation is good enough because usually we see women’s friendships being defined clearly in black and white categories while in reality it’s not always the case. I think women are able to feel a large spectrum of things so our relationships can be a mixture of things. For example, what’s between Piper and Celeste is not simply friendship but also has a lot of family and some romance in it. There’s a lot of fluidity in there, as how I and women I’ve talked to experience things.

But media today always hurry to label things whenever they see fluidity. I think it’s because the male gaze or the capitalist power tries to simplify women. It’s a way of control and I want to be part of the voice that breaks it.

Why do you think the subject of abortion is often difficult to present in a realistic and sensitive way on film?

Abortion is a very political topic especially in the U.S. because of how big of a topic it is, the nuances are often neglected. People should not forget that before it’s political, it’s essentially biological, psychological and emotional. Before it became a political topic, it’s simply the most fundamental human right, human choice and human experience.

I think there are films that quickly jump to political conclusions or overly dramatize by adding surrounding elements when including abortions as part of the films. While making Kindling, even if I am a woman already, I still had to really put myself, my actors and even my team in the feelings of an abortion—the pain, the fear, the hustle, the fight against the system, the self-reflection—to actually feel how much emotions it could trigger for the relationship in the story.

Were there any particular filmmakers who influenced your vision for the film?

Lee Chang Dong, Tsai Ming-Liang and John Cassavetes are among directors that have influence on my work in general. This one as well. But particularly and additionally for Kindling I was influenced by Céline Sciamma. When she created her film worlds, I could feel that she tore down the existing system or set of rules and build things from scratch through her own eyes. I could feel a woman’s gaze when I look at the female characters interact in her films hence the interactions look realistic and organic.

How do you think coronavirus will impact the film industry?

As it brought down the entire economy…film industry would get impacted negatively too when people are less willing to invest. The studio system would gear more towards virtual production. The independent film world would have much less cash in the flow and much fewer productions going on…indie filmmakers like me need to be really creative about cutting down the production size and such.

I was still in China producing a film when we started the casting process with a casting director. My only note for their looks was that I wanted them to look like sisters. Everything else was open. After the first round and after I came back to the US we did two rounds of callbacks when I saw Jill and Nicole together and their chemistry just totally drew me in.

What was the filming process for the film like?

Kindling was made in a class at USC and we were required to shoot something every weekend for 4 weekends and screen some dailies to the faculty and get notes every week. Emotionally it was a bit hard as we couldn’t film continuously, but logistically it worked out because we had several locations spread apart in LA (shout to my production designers Yuelin and Jumai for making it look like rural Arizona). Because all the key crew members are enrolled in the class, everyone was learning together and sharing a bit of themselves with the film. We actually unfortunately lost quite a few locations and there was once a wildfire blocked our way to location when the crew already set out for that weekend of overnight shoots…I can’t be more appreciative for what my crew has given to the making of Kindling.

I’m happy to have heard that people are able to find a bit of themselves in the film. A lot of people told me they loved the chemistry between Piper and Celeste.

I hope this film helps normalize difficulties women have to face such as abortions. The intention of putting it in the context of a re connection is to show that this is just normal as other accidents or medical procedures in life. It definitely shouldn’t be banned in reality or avoided in media portrayals of women. The difference is that it’s more sensitive and emotional than other procedures, which hopefully is shown in the movie through the two character’s intimate exchanges.

I also hope the audiences can see themselves in Piper and Celeste and recognize this way of confrontation and then acceptance is just a lesson of growing up that we all shouldn’t be afraid to face.

I finished a new draft of a feature film script Nanzhou Brothers and I’m currently working on developing it. It’s set in Southeastern China and is about a penniless DJ chasing after a privileged theater director by pretending to be what he’s not. I’d love to talk to people who are interested.

I’m going to try acting for the first time next month, shooting a two-character feature with a small group of friends.

Also wrote a short script. Had plans of filming before the second round of lockdown in LA. I still hope to film it in the upcoming months!

With thanks to Xinyi.