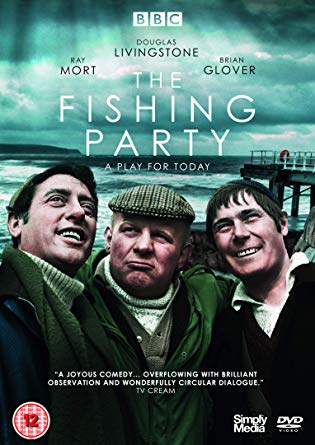 Derbyshire miners Art (Glover), Ern (Mort) and Abe (Livingstone) head north to Whitby for a boys-only escape and a spot of sea fishing. Checking into a shabby B&B run by haughty landlady, Audrey (Jane Freeman) and her henpecked hubby, the trio are bamboozled into paying a high price for their rooms.

They board their chartered boat piloted by a taciturn ex-fisherman, who stares grimly ahead while offering stern warnings about mixing chips and brown ale on a swelling sea. But the boys are half-cut before they’ve left the harbour, and as they reach the cod grounds, they’re decidedly off-colour.

With his unshakable poise, fervour for self-improvement and back-of-the-sauce-bottle learning, Art is the well-meaning group leader who anchors the action as they head for deep water.

The BBC’s Play for Today series was one of the true highlights of British television for several years. It allowed viewers to be drawn into comic, tragic or sometimes plain farcical worlds for an hour and then it left them to ruminate over what they’d seen.

One such play was The Fishing Party. Unlike many other Plays for Today, The Fishing Party is not a story of deep examination and about attempting to find some hidden meaning to life, the universe and everything. It is about a group of friends attempting to have fun on a fishing trip. Its beautiful simplicity has much in common with both Three Men in a Boat and Midsummer Night’s Dream. The sheer joy and enthusiasm that comes from both the script and the performances given by the cast is a treat to behold and refreshingly engaging.

The best performance by far and the glue that holds the whole play together is Brian Glover’s performance as Art. Glover truly was one of the greats of acting – his ability to turn from comedy to drama in an instant was flawless and when he wanted to endear an audience, he could do it succinctly and seemingly effortlessly. Glover particularly demonstrates this in The Fishing Trip. Art is the driving force of The Fishing Trip and Glover never fails to succeed in ensuring that the audience is not only enjoying themselves but engaged with the story that he’s a part of. Glover really inhabits the role of Art and makes him realistic and likeable in a way that few other actors could have done. Brian Glover, though sadly a late great, is a great that won’t be forgotten for his contribution to acting and to entertainment.

You can purchase The Fishing Party from Amazon here.