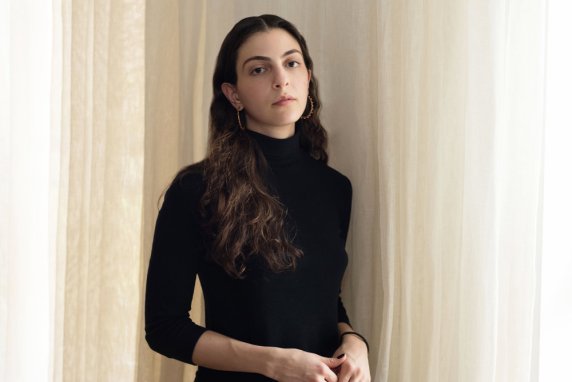 Hello, thank you for agreeing to this interview. Firstly, I’d like to express my admiration at your creation of such a stunning and thought-provoking film and I wondered – what particularly inspired you to tell a story like this?

Thank you! I’ve always been inspired by character and relationship driven films. I wanted to explore a friendship across cultures, generations and languages. The friendship between Nadine and Kirsten was really interesting to me because it was imperfect, yet meaningful, which is a feeling we hint at in our title, Are You Glad I’m Here.

I developed the story alongside our screenwriter, Samuel Anderson; we kind of decided to abandon our normal lives and embark on this project together. We both wanted to make a film in Lebanon, where my family is from and where he’d studied Arabic. Once we had our location and characters that drove the plot and gave us the story we ended up with.

The issue of domestic violence is one that is important to discuss, and this film does it extremely well – do you feel that the media talks about it enough, whether in film or television?

I don’t think we talk about it enough and I don’t think it’s examined from enough angles – a lot of the time it’s simplified or reduced to something that only happens to certain people. Society’s judgemental eye towards victims also makes it harder for women to share their stories, which is why it’s all the more important to see it represented in a nuanced and thoughtful way on screen.

I thought it was really beautifully handled in the HBO show Big Little Lies, where we’re presented with a seemingly perfect couple, who we then slowly realize have an extremely unhealthy relationship. The audience gets very involved in the minutia of it and we feel the conflict of why she can’t “just leave.” Because we get emotionally involved in her struggle it no longer feels like a black and white situation, and I think that’s so important.

Additionally, many marriages happen under religious courts and this makes divorce an almost impossible thing for a woman to obtain. So, in many cases there are laws prohibiting a wife from leaving her husband and it isn’t just a matter of making the decision to leave.

We held auditions in Beirut for around a month, and that’s where I met all of our wonderful Lebanese cast. Marwa Khalil, who played Nadine, is a well-known actress in the region and she really blew me away in her audition. Even after working on the film for multiple years I still just genuinely enjoy watching her performance. Tess Harrison, who played Kirsten, was the one American actor, and we’d worked together on my previous film. I kept thinking of her for the role but I thought it would be such a long shot to have her fly out to Lebanon, and I feel like Americans are sometimes hesitant to visit the Middle East. But she was totally willing to do it! The character of Kirsten is also an American visiting Lebanon for the first time and I think it was really special that Tess got to live out an experience so similar to her character’s.

How was this film different from other films you have directed?

This was my first feature length film, and I always tend towards longer story telling anyway, so it was great to just have the time to fully explore all of the plot points and character arcs that I wanted. It was also the first time I had a line producer and wasn’t doing it all myself, which is such an enjoyable experience as a director! Additionally, I was working with Sam, who wrote the script, and he was very involved in the whole process and was on set every day. I think that was great for the actors, because even if I was busy shooting a scene they could be chatting with Sam about their character instead of just waiting around.

I’d never filmed in Lebanon before, or directed in Arabic, so I was out of my comfort zone! And that made it all the more exciting and memorable.

I hope that audiences will view all these characters with a forgiving and tender eye, and understand that no one is wrong or right and that these are all just humans struggling to make decisions under the strange circumstances of life. I also hope they’ll be refreshed to see a film based in Lebanon that doesn’t centre around violence or politics!

It’s been so exciting to finally watch the film with an audience! It takes so long to get to that point that you start to forget it’s meant to be seen by other people. We just recently won the audience award at the Brooklyn Film Festival, so that was very exciting for us. One thing that I’ve really appreciated is how receptive everyone’s been to the tonal shifts of the film- meaning the film doesn’t really stick to one genre and can take a few sharp turns- just like life does! Although we handle some heavy subjects we still have playful moments; life doesn’t adhere to a genre and I don’t think a film needs to either. I’m happy to see that our audiences have agreed!

Given the political climate at the moment, do you feel that it is important that this film portrays a strong relationship between two characters from different cultural and ethnic backgrounds?

Definitely! This film is all about what happens when you befriend someone outside of your echo chamber; it’s about what you gain from an unlikely friendship. You can tell that Kirsten has a group of friends who are all Liberal Arts college graduates who have similar life experiences and beliefs and who aren’t really challenging one another. Similarly, Nadine is surrounded by other housewives and family friends who she doesn’t feel she can be totally open with. Neither woman is questioning her life, they are both lacking something, and that all changes once they meet.

I’m currently developing a scripted TV sitcom, which is a workplace comedy about a dysfunctional production company. I’m also writing an indie film, and that will hopefully become my next directing project.

With thanks to Noor.