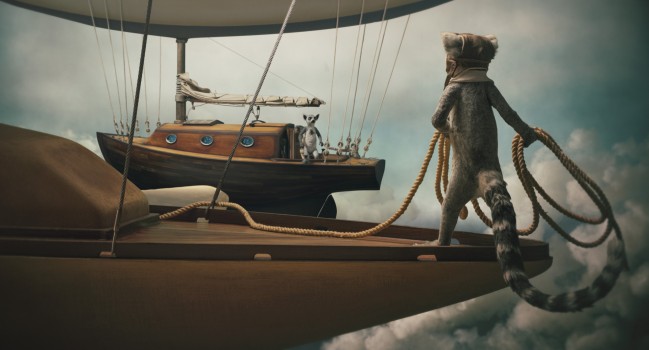 Firstly, I’d like to thank you for agreeing to this interview and I’d like to congratulate you on making such a splendid film. How did this film come about?

Two Balloons got its start with a song, the ocean and a scale problem. During a long passage on a sailboat I saw a funnel cloud for the first time. It was about 400 feet high and as I watched its conical shape skip across the white capped waves, I was listening to a song in 3/4 time, the time signature of a waltz and that’s when the idea for Two Balloons happened.

Initially Two Balloons was intended to be a live action short. When the aircraft hangar we needed to accommodate full scale dirigibles became unavailable we suddenly had a scale problem. I turned to stop motion as a solution and also an opportunity to delve into a medium I’ve always been passionate about.

The animation is breath-taking. Did you have a firm image of what the set and characters would look like from day one or did it evolve over time?

The sets were influenced by the 1930’s and 1940’s.  I collected thousands of photographs from those decades and strived to let the nautical and aviation of that era inform the production design.

When we made the transition from live action to stop motion we also transitioned from actors to puppets. I took the decision to use animal characters as a way to help suspend disbelief. The inspiration for our characters to be lemurs came from a passage in a book titled The Unquiet Grave by Cyril Connolly. I had read the book 8 years prior to Two Balloons. This is the passage that created the inspiration for our characters:

In youth the animal world obsessed me; I saw life through creatures which were in a state of grace, creatures without remorse, without duties, without a past or a future, owning nothing but the intense present and their eternal rhythm of hunger, sleep and play. The ring-tailed lemurs with their reverence for the sun, their leaps through the air and their howls of loneliness, were dark immortals of a primitive race…they held the secret of life to me; they were clues to an existence without thought, guilt or ugliness wherein all was grace, appetite and immediate sensation: Impressionist masterpieces which Nature flung upon the canvas of a day.

What difficulties were involved with filming the short? Or did you find it easier than other projects you’ve worked on?

Two Balloons is my first stop motion film. In many ways I felt as if I were learning a new language. There were challenges that don’t present themselves in live action. An example is set shifts. Sometimes a big change in humidity or temperature will shift a set. When that happens you can’t continue animating because every new frame will not match the previous animation. There were mornings when we’d have to wait for 4 to 6 hours to get the heat and humidity of the studio back to where it was the day before. When we matched it, the sets would shift back and line up perfectly.

There were many other unforeseen challenges but most of them shared the same requisite solution, patience.

I was just at the 42nd Cleveland International Film Festival. During the Q & As after the screenings I noticed that a lot of people were drawn to the analogue aspect of the film, how the sets were built.

Our sets, props and puppets are handmade, as are the backgrounds. The clouds are made of wool, our matte paintings are hand painted. The lightning strikes in the storm sequence were filmed practically utilizing a Tesla Coil. Two Balloons required an ocean. We built what we called a wave table. It was 300 square feet. The under-carriage consisted of 100 plus acrylic pistons that were connected by high-test fishing line leading to a step motor that allowed us to shoot frame by frame. The surface was made of vinyl shower curtains and Gesso and designed to force perspective to give a viewer a sense of infinity.

How does work on a stop motion animated film compare to working on other types of films?

The starkest contrast is extra coverage. In stop motion it is not possible to experiment with extra takes. We spent 16 months storyboarding prior to shooting. In many ways the edit for Two Balloons was finished before the first frame was captured. We left room to experiment and make mistakes but when we launched a shot we always had a specific frame count and were diligent about how it would cut with the preceding and following shots.

What was the process of recruiting animators for the film like?

A friend of mine suggested I call Teresa Drilling who had been his professor at art school. Teresa is a two-time Emmy award winning animator. She’s worked on Academy nominated and winning films like, The Curse of the Were-Rabbit, Coraline, Chicken Run…

We met at a Cafe near her home and talked about the project. At the time, Teresa was on her way to Los Angeles to work on the animated feature Anomalisa. I remember her telling me that 80% of independent stop motion films never get finished. We talked through the long list of chores that had to be completed to even begin. Teresa opened her address book and introduced me to many of her friends in the Portland animation community.

We said goodbye with the tacit understanding that when she returned from LA if I had a studio built, storyboards finished, the puppets fabricated and sets completed, she’d join the film. For almost a year and a half I worked on completing the tasks that were necessary to begin and when Teresa returned we got started.

How do you feel about the reaction the film has elicited?

Really good. It’s nice to see four years of work get on the screen and see people respond positively to the film and have the approval of the programmers at festivals I admire means a lot.

One of the reasons I wanted to experience stop motion was to prepare myself for the adaptation of a short story by Dave Eggers. The story I want to adapt means much to me and I hope to get started on it soon

You can read my review of this incredible short film here. With thanks to Mark C. Smith and Adam C. Sager.

One response to “Interview with Mark C. Smith (Director of Two Balloons)”