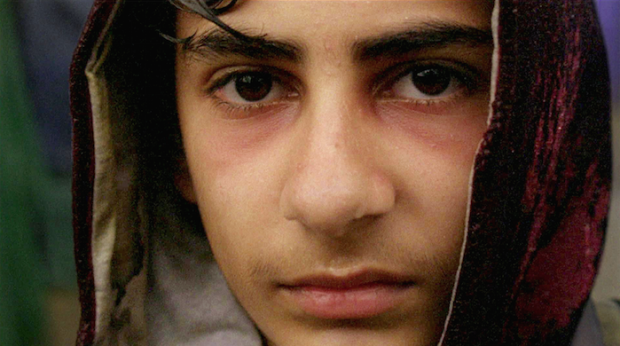 13 year old Aamir (Alan Assad) has fled his home and been separated from his family only to be stranded alone in the largest unofficial refugee camp in Europe. When he is befriended by Katlyn (Jasmine Blackborow) a well-meaning but thinly stretched British volunteer, she becomes Aamir’s last hope for salvation.

Aamir may be the story of one boy but it is a metaphor for the stories of thousands of children displaced by wars in their own countries, often far from where they find themselves, in refugee camps. This is not a film that is upbeat or fun but it is very truthful. Director Vika Evdokimenko imbues the film with bare bones realism; we don’t see the film through a tinted lens as a lesser director may have done. Instead Evdokimenko shows us the true horror that all child refugees go through – from the sheer brutality of the terror that Aamir sees in his home country to the utter desperation and despair he finds when he arrives in the refugee camp. In certain shots the film looks more like a war movie than a film about the aftermath of war but this is the point Evdokimenko is subtly making – that even when children like the titular character have left the conflicts that scare them, they must still endure the conflict that comes with being a refugee.

Both the main stars Alan Assad as Aamir and Jasmine Blackborow as Kathlyn are excellent. Assad’s Aamir is complex; desperate and yet innocent, dreaming of a better life away from the squalor of the mud of the refugee camp. Assad gives the part real energy and he is a captivating main protagonist. Jasmine Blackborow’s Katlyn is equally excellent; Blackborow gives Katlyn a sense of decency and kindness and a desire to help Aamir that is thwarted by the conditions of the camp. Blackborow deserves a great deal of praise for her performance because she gives the part an inner sadness that is difficult to achieve and she portrays it with true conviction.

Aamir is not a happy piece but it is a thoughtful film that has a great amount of soul and conviction as to the story it is telling. Everyone involved deserves great praise particularly the director and two main stars who bring an all too common yet far too often ignored story to the screen.