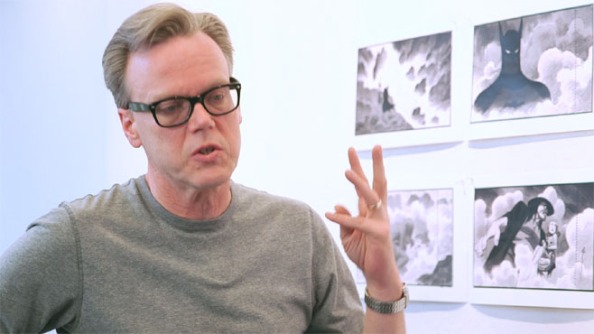 Bruce Timm is rightly revered as one of the greats of recent cartoon history. His work on ground breaking shows like Batman: The Animated Series, Justice League and other such great works. Yet his recent output has been somewhat… lacking. I’ve previously reviewed his rather mangled version of The Killing Joke and the horrific Justice League: Gods and Monsters and attempted to watch his most recent work Batman and Harley Quinn. All seem to be the work of some lesser writer than the guy who brought Batman: The Animated Series to the small screen. What though, are the problems with Timm’s most recent work that makes it so… dreadful?

To pause in the criticism for a moment – Timm’s artwork is still as strong as ever and each of his recent works are aesthetically pleasing; they combine all his usual hallmarks and in the case of Gods and Monsters present some interesting twists on them. The actors themselves are all perfectly good; Kevin Conroy is excellent as Batman in both The Killing Joke and Batman and Harley Quinn. So, to Timm’s credit the production values are as high as ever. It is not these elements that are the problem but rather the awful, awful scripts.

As I have already stated in my review of Justice League: Gods and Monsters and The Killing Joke, Timm makes a series of bizarre decisions. Most notable is the  dreadful prologue to The Killing Joke; it is badly characterised, lacking in any subtlety and inserting untasteful sexual elements. For a lengthier deconstruction of The Killing Joke, my full review can be found here. Timm’s inability to successfully adapt one of the most well-known graphic novels of all time is a sign of his talents diminishing. Even when working with work that is completely original such as his Justice League: Gods and Monsters, Timm mangles all of his characters, attributes laughable motivation to the villain of the story and rather than creating an interesting alternative to the traditional trio of Batman, Superman and Wonder Woman, creates a nasty little piece which isn’t worth watching. Again, a more detailed outline as to the crassness of the piece can be found here.

To top it off Timm’s most recent work, Batman and Harley Quinn is a travesty equal of the above-mentioned horrors. Whilst the idea for the plot is good, Timm writes it poorly. Once again, he fills it with puerile sexual innuendo and a complete lack of understanding of Harley Quinn, a character he co-created.  Again, no blame can be attributed to the artwork (though Batman’s build does seem a bit jaunty, as if drawn at an angle) or the voice acting but Timm’s script is so lacking, dull and at times simply sordid that it comes off more like the attempts of a child imitating Timm’s work rather than the great writer himself.

I don’t dislike Bruce Timm; I hardly know him. But his recent work is more a smudge on his great work on cartoons than a continuation. Rather than focussing on what he knows best, Timm seems to have slipped into attempting to be cool and edgy – inserting sexual innuendo, over the top violence and unnecessary puerile humour that is not worthy of bearing his name. So please, Mr Timm – can you go back to how you used to be?

One response to “Whatever Happened to Bruce Timm?”