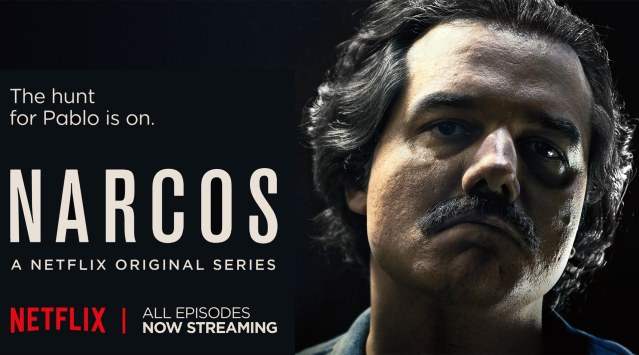 “Okay, let me break it down for you. 4,000 soldiers, tens of thousands of rounds fired and a bunch of fuckin’ helicopters. There was no way Pablo Escabor was getting out of this one. Right?”

Pablo Escobar’s (Wagner Moura) freedom will come at a heavy cost. Angered by his perceived slight by the government, Escobar is eager to remind those that betrayed him of his place – the most powerful narco-trafficker in the history of the world. Unquestionably more dangerous than ever, Escobar works to rebuild his empire and unleashing war against the Colombian State.

As the innocent victims of Escobar’s ugly war begin to rise, so do his old and new enemies such as the vengeful widow Judy Moncada (Christina Umana). Charismatic leader of the Cali Cartel, Gilberto Orejuela (Damian Alcazar), fears that Escobar’s recent accession comes at his own demise and the exiled head of Search Blos Colonel Carrillo (Maurice Compte) is desperate for another shot at the famous Kingpin. The DEA, Steve Murphy (Boyd Holbrook) and Javier Pena (Pedro Pascal), continue to work tirelessly to serve justice and bring peace to their adoptive homeland.

Nacros is a series that delves deep into the heart of some of the most dangerous drug cartels in history. Set in atmospheric and seductive Colombia, Narcos forensically tells the story of one of the most powerful drug pushers in history; Pablo Escobar. Whilst we are meant to root for his enemies – the DEA, represented by Steve Murphy and Javier Pena it is Wagner Moura’s excellent performance as Escobar combined with the characterisation of Escobar’s violent rivals that makes us root for Escobar. Escobar is the antihero of the series and though he gains his money and power from a life destroying drug, he is still an engaging and likeable character.

At the heart of Escobar’s likeability is the performance of Wagner Moura. Moura perfectly balances the image of brutal, vicious drug baron with a much more delicate and sophisticated side of Escobar. He cares about his family and the people of Colombia and wants to help them – though he also wants to control them, making Escobar not a simple antihero. Moura expertly brings this to life and whenever Escobar is in a room his presence is deafening; his physicality ensures that whatever scene he is he dominates it. Moura’s Escobar is one of the true highlights of the series and his final scenes are a master class in acting.

The cinematography in season 2 of Narcos is stunning. Colombia is shown in all its dark, brooding and majestic glory. From Escobar’s hideouts to the streets of Bogota, all of Colombia is laid bare and it often feels as if we are in the scenes themselves.

Narcos is a fantastic, rugged and uncompromising series which does not shy away from showing the brutal nature of the drug cartels that had such a grip on Colombia. It is a must watch for anyone who enjoys dark, gritty and beautifully shot TV series.

With thanks to Nordic Noir and Beyond. You can buy the first two season of the award winning Narcos from them here and from Amazon here.