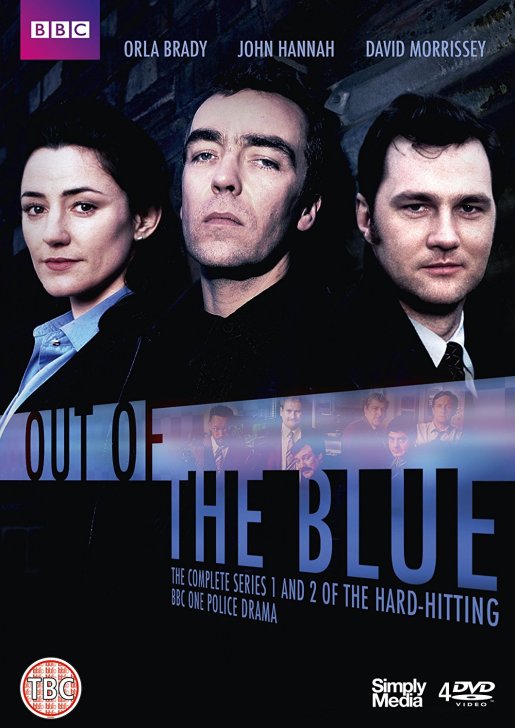 Out of the Blue features an outstanding directing team including BAFTA-winner Richard Laxton (Him & Her), Emmy-nominees Sam Miller (Luther) and Julian Farino (Entourage), and BAFTA-nominees Richard Standeven (Brookside) and David Richards (Silent Witness).

In the first series BAFTA-nominee John Hannah (Four Weddings and a Funeral) stars as D.S. Frank Drinkall (also known as “Frankie”), a high-flying protagonist and head of Brazen Gate CID. His life is turned upside down after being diagnosed with epilepsy, but he stubbornly chooses to carry on with the department’s physically and mentally taxing work. Trying to hide his condition from colleagues, he soon finds himself perilously spiralling downwards.

The second series sees BAFTA-nominee David Morrissey (The Walking Dead) take the reigns as the perpetually ruffled department head D.S. Jim “Lew” Llewyn. But when the rest of the team believe him to be working to his own personal agenda, his actions soon come under investigation.

Out of the Blue is one of the truly overlooked gems of 90s television. Whilst crime drama series are nothing new, those that intertwine the lives of their protagonists with the crime they are involved with have become particularly popular in recent years – Sherlock, Broadchurch, True Detective and Luther are a small sample of the vast array of shows that go this route. Yet Out of the Blue pipped all these series to the post not only by coming out in the 1990s but also by being far more interesting than them. In tone, Out of the Blue is dark but not depressingly so; the series reflects the lives of police officers accurately. Rather than their lives being ones of happy go lucky coppers ticking off naughty school children or brooding detectives soliloquising about their horrible home life, the series shows the good and bad sides of being a detective. This makes it a far more interesting and complex series than many other shows because it is attempting to give an accurate and no frills depiction of life in the police rather than giving us a fantasy TV cop rendition of what life in the police is like.

The cinematography in the series is beautifully bleak. Filmed and set in Sheffield, the series uses the post-industrial landscape of the city to great effect – the run down tenements are filmed with disturbingly life like accuracy. Other particularly powerful shots include the opening of the final episode of the first series – contrasting between the officers enjoying themselves and a brutal murder that is waiting for them in a place they would least expect. Not only is the cinematography realistic and gritty, Out of the Blue is a landmark in television history for being one of the first British detective series to utilise the hand held camera to its full potential.

The writing for the series is excellent with Peter Bowker (Blackpool, Eric and Ernie) and Bill Gallagher (Lark Rise To Candleford, Paranoid) providing exciting, witty and dramatic dialogue for their stars. Both writers are masters of their craft and their work on Out of the Blue is some of their finest – crafting relatable and interesting characters most notable amongst whom are DS Llewyn, DS Drinkall, DS Bennett and DC Brazil.

The acting in Out of the Blue must be strongly praised. Though they are only in one series each, both John Hannah and David Morrissey give master class performances. Hannah is riveting in every scene he is in and his slow disintegration from hard working officer into a man struggling with inner demons and a determination to keep his job is heart breaking to watch. Morrissey’s similarly unstable Llewyn is at times frightening to watch – Morrissey plays up Llewyn psychotic aspects to their full dramatic hilt and ensures that there is no doubt in his mastery of the role. Orla Brady’s smooth and controlled performance as DS Bennet helps convey her attempts to fit in to a male dominated environment and mark herself not simply as being a female DS but being a great detective. Neil Dudgeon’s DS Brazil is not only entertaining – his repeated use of the phrase “shag off” is amusing in itself but Dudgeon is not simply a clown. He gives a nuanced and at times dramatic performance that brings Brazil truly to life.  All the other members of the main cast such as Darrell D’Silva, John Duttine, Andy Rashleigh, Lennie James and Peter Wright are all excellent in their parts. James in particular gives DC Bruce Hannaford a wonderful twinkle in his eye and swagger that makes him thoroughly enjoyable to watch.

Out of the Blue is one of the finest original detective series the BBC has ever produced. Slickly produced with a dynamic and entertaining cast; imaginative and thought provoking scripts and with stunning cinematography it is a true highlight of 90s TV. It’s just a shame that the BBC didn’t make another series because Out of the Blue is police drama at its most affecting because it has a real soul.

With thanks to Simply Media. You can purchase Out of The Blue from Amazon here and directly from Simply Media here.