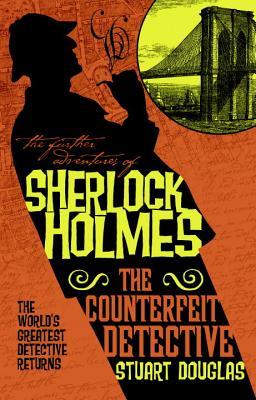 An anonymous letter brings strange news to Baker Street; there is an impostor Sherlock Holmes at work in New York City, solving cases and taking society by storm. The real Sherlock Holmes wastes no time in crossing the Atlantic to confront the charlatan. But he and Watson find more than they bargained for: the counterfeit Sherlock is missing, his landlady has been horribly murdered, and his clients are refusing to reveal their secrets…

Set against the bustling hub of late Victorian New York, The Counterfeit Detective is one of Titan’s best Sherlock Holmes novels to date. Whilst Elementary may have shifted Holmes from London to New York, it fails to capture the sheer brilliance of the world’s greatest detective in New York in the same way The Counterfeit Detective does. The novel combines Holmes at his best stalking the streets of London whilst also introducing an exciting alteration to the Holmes formula; Holmes out of water in New York. Part of the mystic of Conan Doyle’s original Sherlock Holmes stories was Holmes’ assured knowledge of London’s criminal underbelly.

By placing Holmes in a city similar but not the same to London, author Stuart Douglas plays a masterful game of putting the world’s greatest detective in a fish out of water situation whilst facing a mirror image of himself that is attempting to profit off his reputation. These two contrasting threads, combined with Douglas’s excellent characterisation of Holmes and Watson add weight to the novel. Rather than focussing solely on the mystery of the fake Holmes or attempting to present an intimate portrait of Holmes’ character Douglas balances both giving ample amount of space to the plot and the characterisation of his two leads. Douglas equally provides a rich variety of characters throughout the book – his version of Inspector Lestrade is wonderfully in keeping with Doyle’s own image of the character. Similarly, Douglas’ own creations stand out; Lestrade’s New York counterpart, Bullock responds you would expect a New York policeman of the late 19th century would to Holmes’ rather eccentric manner of detection.

Overall, The Counterfeit Detective is a masterstroke of Holmes literature. Combining the regular conceits of the traditional Sherlock Holmes adventure with a change of scenery and a different type of mystery provides a new and exciting addition to the Sherlock Holmes canon that has to be read.

With thanks to Titan books. You can purchase The Counterfeit Detective here.