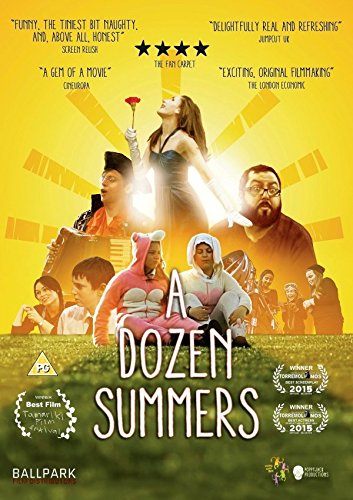 They’re as ordinary as you can be when you’ve chased off the narrator of a children’s film (Colin Baker, Doctor Who) and taken over the story. As ordinary as you can be when you have an aspiring model (Sarah Warren, M.L.E) for a mother and an overprotective writer (Kenton Hall, The Honourable Rebel) for a father, both of whom seem determined to prove how weird grown-ups can really be.

As ordinary as you can be when you decide to take your borrowed audience on a whirlwind trip on what it is really like to be a 12-year-old in the 21st century. They are assisted by prince and princesses, cops and robbers, first loves, knights, bullies, teacher, werewolves, vampires and Gary (Ewan MacIntosh, The Office) from the corner shop. So not very ordinary really.

Very few indie films can claim to be like A Dozen Summers. It has a special aura, a feel to it that makes it truly stand out. Rather than give us a version of the traditional children’s film that we might expect, Kenton Hall instead gives us something that is completely unexpected. Hall’s device of putting the unanticipated at every turning makes A Dozen Summers a film that can truly claim to be surprising. Hall does not go in for all the usually expected features of a children’s film; nothing is sugar coated in A Dozen Summers. Hall uses realistic camera angels and dialogue to achieve his aim of creating a truly unique film that mixes fantastic with the realistic. The naturalistic and fantastic elements move perfectly and Hall creates something akin to a modern day Alice in Wonderland but somewhat naughtier. The devious and clever humour can appeal to both adults and children alike.

The acting in the film is very well done with Colin Baker’s turn as the “Narrator” particularly funny. Kenton Hall and his daughters, playing the parts of Maisie and Daisy fit into their roles perfectly and are clearly looking forward to a bright future in the industry.

In conclusion, A Dozen Summers is a fascinating film that delves into the minds of two twelve year olds in a way that other films simply do not attempt or achieve. Simply for this fact, even taking out the excellent camera work and realistic script, I would certainly recommend A Dozen Summers.

One response to “A Dozen Summers Review”