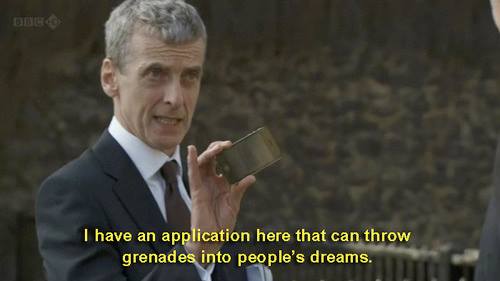 In 1986, exactly thirty years ago, Doctor Who was in crisis. A show that had once been a staple of tea time television had been put on a protracted hit list by Michael Grade who wanted the stories dead. Interestingly enough, Grade’s greatest contribution to television was to convince Jeffrey Archer to let him adapt Archer’s novel Kane and Abel – it features an important plot point about a missing nipple.  Though Doctor Who did not die in 1986 the series was mortally wounded. Even the efforts of Ian Levine’s classic track “Doctor in Distress” were not able to stop the show losing many of its former audience. Within three years the show would be dead. Is Doctor Who in the same situation now that it was then?

Some feel that Doctor Who isn’t in the place it should be. Richard B Brookes, member of the Five Who Fans and noted wit, raconteur and TV Movie fan had this to say:

Somewhere between Steven Moffat’s takeover of the show for its 5th series in 2010 and the rise of various online social media platforms, Doctor Who exploded – arguably the show has always had a following anywhere you go, but around the time of the start of Matt Smith’s takeover of the show, it became massive, eventually culminating in the rise of superwholock in early 2011 (or at least that’s what google trends tells me) and completely dominating Tumblr ever since.

It’s started to feel a lot more niche, the show feels like it’s stagnated, struggled to keep innovating and lost touch with its original audience, but who can argue with the still huge ‘fandom’ that seems to love everything about the show. I don’t know, I don’t have any figures. I’m cynical and old and just want a bit of a change of scene.

Richard may be right. Certainly Doctor Who is a show based on change and one which dies without it. Some would argue that this is coming – Chris Chibnall is set to take over the show in 2018. Yet will Chibnall’s era be distinct enough to keep a show that has been on air for over ten years going? Most BBC shows are lucky to see their tenth anniversary. My Family lasted 11 years, New Tricks 12 and ITV’s rating goliath Downton Abbey a mere five. If, as we can presume, Doctor Who is on air in 2020 it will have been on air for 15 years. Can the show still attract not only older fans, desperate for The Rani to return, but also younger fans who have only seen Matt Smith and Peter Capaldi? It seems an inconceivable paradox that any writer would be hard pressed to fix. However, script editor David P Davis is optimistic about the future.

Firstly, I’d like to ask how you think Doctor Who will develop in the next few years as we move from Steven Moffat’s tenure on the show to Chris Chibnall’s?

The great thing about Doctor Who is that you can change every single one of its parts from the runner, all the way up to the Showrunner and even the Doctor himself and the fans still accept that it’s the same show.  In fact, the fans expect it! Change is the necessity that keeps the show fresh.  I know that Steven Moffat is a super fan of the show and always writes like a fan. He also has a darker edge to his writing than say Russell did.  I don’t know too much about Chris other than the fact that he wrote one of the most successful shows in recent memory in Broadchurch, which was high in emotional drive, and I would expect his version of the show to also be high in emotional drive.

Secondly, having worked so closely with the Doctor Who production team for so long, how do you think the world’s perception of the show has changed since the beginning of the 2005 revival?

Love this question! I think that when Russell started it back up again in 2005 there was no expectation. I’d go as far as to say that people expected it to fail and then were shocked, to say the least, when it was so very, very brilliant.  But now the fans expect it to be brilliant; worse still they demand it! The world perceives the show as a beacon of excellence from the BBC, so all I can say is good luck to Steven for his final series and good luck to Chris for the mammoth task he’s taking on!

Finally, is there ever a time in the future that you can imagine the TV landscape not featuring Doctor Who in some form or another?

The simple answer to this is yes… and no… Doctor Who is too ingrained in our consciousness to ever go completely away; there will always be books, magazines, and games etc.  I can, however, see a time when it’s not on TV anymore, but I can guarantee there will be another Russell T Davies ready and waiting to reboot it!

David also has a point. Fans of the show expect it to change and accept when it does change. Yet has the show run out of energy? The groans that have been heard over some of the recent plot twists in the show seem to indicate that if Doctor Who is to survive in the future, it need a new direction. Hope may be at hand though. As The Third Doctor once said “While there’s life there’s……”

With thanks to Richard B Brookes and David P Davis.