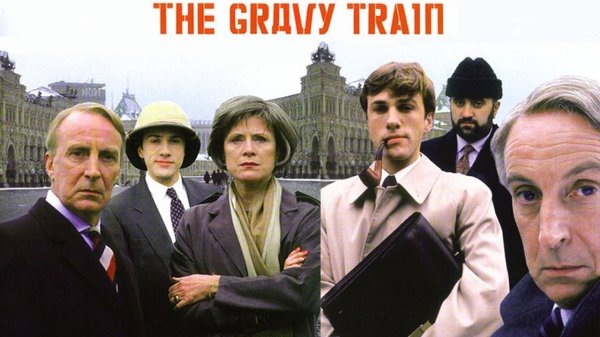 Following the result of the European Union referendum, Britain is set on a path to leaving the EU. It may be tough; many will not like it but it seems as if that within the next few years we will no longer be a part of the EU. This seems like the perfect time to look back on one of the best series ever to be made about the EU – The Gravy Train.

Written by one of Britain’s great satirists, Malcolm Bradbury, The Gravy Train examines the inner working of the European Union Commission and the various sleazy goings on behind closed doors. Witty, dramatic and thoroughly enjoyable the first series focuses on the EU’s surplus produce or “food mountains” and the various illegal money making schemes involved with them. The second series sees the various aborted attempts to introduce a post-Communist Eastern European country into the EU – only they don’t have an economy.

Bradbury’s examination of two separate elements of the EU enables the series to remain fresh and invigorating viewing. At the heart of both stories is Christoph Waltz’s charming but inept Dr Hans Dorfmann, an idealist whose attempts to see the best in the European project as both somewhat naïve and misplaced. Who could forget Dorfmann’s dismayed superior Michael Spearpoint, whose desperation for promotion and honours is skilfully portrayed by the late Ian Richardson. A wonderful moment in the second series resolves around Spearpoint’s dismay at his knighthood slipping out of his hands, “My K!” he moans to great comic effect.

To add to the central dichotic relationship of the series (the idealist German and the ambitious and cynical Brit) is a superb supporting cast; both Alexie Sayle and Roger Lloyd Pack corner the market in dodgy Eastern European “business men”. Spearpoint’s wife, Hilda is memorable in almost all regards – from her extraordinary use of her eyebrows to the delicious stress she puts on the line “a ménage trois!” is comic genius. To top the cast list is Jacques Sereys’ egotistical French diplomat Villeneuve, a man who doesn’t let attempting to kill a man stop him from trying to arrange a deal with him. Bradbury’s rich and vibrant cast of characters’ help make the already comic scenarios he sets out across the two series even more enjoyable.

In truth, even if politics does not interest you The Gravy Train is a comic delight that should be enjoyed by as many people as possible. It reaches heights of comic decadency that only fit the surrounding of the Belgrade. So enjoy it whilst it is still relevant.

2 responses to “A Look Back At The Gravy Train”