If you haven’t seen the film yet SPOILER WARNING. This review contains spoilers.

Following his titanic struggle against General Zod, Metropolis has been razed to the ground and Superman is the most controversial figure in the world. While for many he is still an emblem of hope, a growing number of people consider him a threat to humanity, seeking justice for the chaos he has brought to Earth. As far as Bruce Wayne is concerned, Superman is clearly a danger to society. He fears for the future of the world with such a reckless power left ungoverned, and so he dons his mask and cape to right Superman’s wrongs. The rivalry between them is furious, fuelled by bitterness and vengeance, and nothing can dissuade them from waging this war. However, a dark new threat arises in the form of a third man: one who has a power greater than either of them to endanger the world and cause total destruction!

One of the last lines of Batman v Superman is spoken by Bruce Wayne, when commenting on the creation of a Justice League says “We can do better; we must do better, we will do better.” For film goers and DC fans, I hope he is right because if he and by a greater extension Zack Snyder can’t then the entire DC “Extended Universe” project will be dead in the water before it has had time to prove itself.  This isn’t to say that the entire movie is bad; there are redeeming features to it but they are few and far between.

Beginning with Batman recounting his parents’ murder, the action soon moves to a recap of the ending of Man of Steel with Batman witnessing the destruction of Metropolis at the hands of Superman and General Zod. This is the part of the movie that works the best; whilst Batman’s origin isn’t needed Snyder does it in a clear and concise way that doesn’t overstay its welcome and his integration of Bruce Wayne into the ending of Man of Steel feels natural and not at all forced. It’s what comes after that that begins the film’s slow descent into incoherent Frank Miller tributes.

Lois Lane, fearless journalist meanwhile begins her dangerous interview with a terrorist group by asking its leader “Are you a terrorist?” You can see why she won a Pulitzer can’t you. However, one of her buddies turns out to be working for the CIA and the nasty not ISIS people promptly shoot him in the head before imprisoning Lane. Where is the Metropolis Marvel? Probably brooding over whether he should agree to a Man from UNCLE sequel as he doesn’t appear until the terrorist guy nearly kills Lois and Luthor’s evil henchmen have planted evidence that Superman is a nasty, evil poop head. That’s Luthor’s phrasing, not mine, I hasten to add. 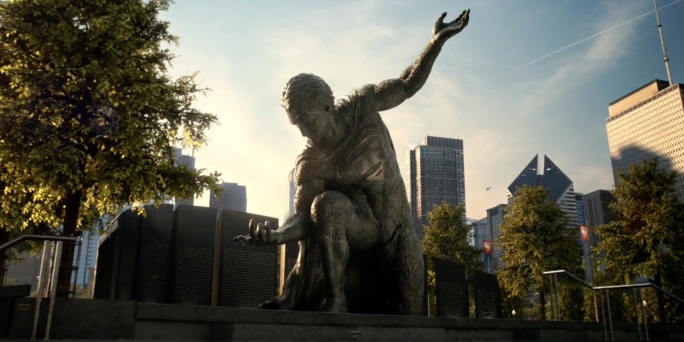 The problem with this section and all the scenes featuring Superman before the third act is… well he isn’t very Super. He stands around looking as if his reporter’s salary has been slashed in half and not saving people. Yes, there is a montage of him saving people with talking heads commenting on how blooming lovely he is but not only in the Lois scene above but then in the later court scene, he simply stands around while people die. Whilst in that Lois scene he’s not admittedly there when people die but in the court room scene he stands still whilst a massive bomb goes off, killing everyone in the room but him. How is that Super? Perhaps Snyder is attempting to still make out that Superman is learning to be a superhero and that’s why his efforts to save people come off as half hearted. The same excuse cannot be said for Snyder’s Batman. 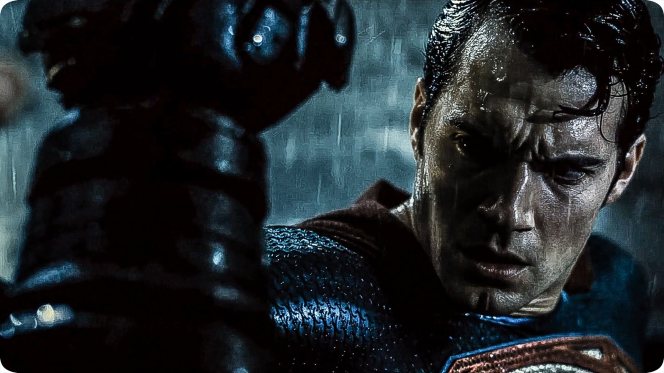 Whilst Batman does the most of the three headline heroes (himself, Superman and Wonder Woman) in regards to advancing the plot, he isn’t exactly good at it. He’s an alcoholic (which would, you think, impair his ability to operate as Batman… actually, the alcoholism explains a lot) who gets easily tricked out of the things he’s trying to find and becomes friends with a man he’s had a seething resentment against for two years after he finds out their mothers’ both have the same first name. What a top notch guy! Affleck is good at playing his Batman for what he is – Frank Miller’s militaristic, insanely paranoid and gun totting iteration seen in such seminal works as The Dark Knight Strike Again. Yet this isn’t Batman – he resorts to violence to solve all of his problems. Critics complained that in Christopher Nolan’s Batman trilogy, his Dark Knight didn’t emphasis as much of the detective side of Batman. Snyder’s Batman is less detective and more back street brawler, unconvincing as the “smartest guy in the room” but believable as one of Arkham Asylum’s jazzier inmates. Perhaps Snyder, like Miller in All Star Batman and Robin felt that they only way he could make his main character (Superman) believable and likeable was to turn everyone else around him into colossal tits as well?

In fact, the Miller connection seems to run through this film and Snyder’s work as a whole. One of his few successes was adapting Miller’s 300, a violent, image conscious mess of a book telling the famous battle at Thermopylae in Milleristic rhetoric – ie, as long as you’re good it is okay to use as much violence as possible. Aside from the obvious references to The Dark Knight Returns, Snyder seems to, consciously or unconsciously, it is hard to tell, take Miller tropes and run with them. Superman is readily manipulated by Lex Luthor and is somewhat less than super; the unrealistic fight and sudden resolution of Batman and Superman’s film length struggle feels like Spawn/Batman and the fear of government involvement with superheroes mirrors TDKSA.

Through the myriad scenes that make up the film’s second and third acts, Jesse Eisenberg’s Luthor dances about trying to make us take his plans to bring about “the greatest gladiator match in the history of the work” seem a) believable and b) not pointless. Luthor’s vendetta against Superman doesn’t seem personal; as he states in the film he’s making loads out of reconstructing Metropolis. Nor does he seem to have anything against Batman who he aides by alerting Batman to the existence of Kryptonite (which, to the film’s credit has a more logical reason for why there is so much of it that Luthor can access than in most comic books). If anything, Luthor doesn’t come off as a criminal genius but an overexcited fanboy, desperate for his two favourite characters to fight so he can find out who’d win. Which is probably why Doomsday is thrown into the film; at least one of the threats to the film’s characters had to be real.

Which leads to the end of the film and the set-up for future movies. Whilst the prospect of more films in the current DC Extended Universe might not sound palatable, there is hope. The Suicide Squad film looks as faithful to its comic books sources as most Marvel films are and Gal Gadot’s Wonder Woman is one of the few truly good things about Batman v Superman and her solo film will hopefully realise her full potential. Ultimately, I’d recommend watching any future DC film that doesn’t have Zack Snyder directing it because until he starts reading more fiction than just the work of Frank Miller, his DC films will always fall below the mark.