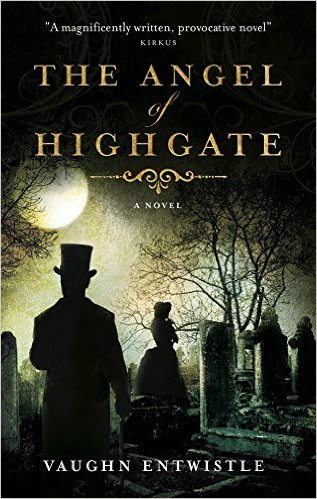 It is October 1859 and notorious philanderer Lord Geoffrey Thraxton cares for nothing except his own amusement. After humiliating an odious literary critic and surviving the resulting duel, he boasts of his contempt for mortality and insults the attending surgeon. It is a mistake he will come to regret. When Thraxton becomes obsessed with a mysterious woman who appears to him one fog shrouded night in Highgate Cemetery, he unwittingly provides the doctor with the perfect means to punish a man with no fear of death.

The Angel of Highgate fits perfectly into the landscape of the Victoriana crazed culture that we are experiencing. With dramas like Dickensian and Jericho on TV and recent blockbusters like Crimson Peak dominating the skyline, it seems right to read a book which both salutes them so dedicatedly. Indeed, in many ways when Dickensian ends Vaughn Entwistle’s latest work will be the perfect remedy for those wishing to bask in this lamp lit yarn.

The Angel of Highgate’s plot may not be the greatest in the history of literature but it does hold the reader’s attention. Entwistle centres on the roguish antics of Lord Thraxton in the first half, counterbalancing it with Doctor Garrette’s disturbing attempts to… evolve the next stage of humanity? While Thraxton’s sections are bracing, raucous and straightforward, Garrette’s purpose is more circumspect and somewhat confusing to the audience. Is he trying to evolve life? Is he trying to merely keep foetuses alive? Why merely foetuses and not other forms of human life? This somewhat fractures the novels first section between the character driven Thraxton section and the muddled Garrette sections.

However, by the middle of the book things pick up when Thraxton’s armoire Aurelia is threatened and Thraxton must rescue her. The second half of the book builds on the firm characterisation for Thraxton that is established earlier, making his action in the second half seem natural. Yet the second half suffers its own problems; the climax of the book is undermined firstly by repeating an earlier part of the novel where Thraxton faces off against “high mobsman” Mordecai Fowler and secondly by making the conclusion to Thraxton’s battle with Garrette more an accident than a fulfilling battle of wits.

Yet, even though the plot has holes, Entwistle still delivers creative retellings of Victorian architypes. Thraxton owes much to Eugene Wrayburn of Our Mutual Friend; a rakish gentleman who is reformed by the love of a woman from a lower class than himself. Thraxton even has his own Mortimer Lightwood in the form of Algernon Hyde- Davies, Thraxton’s school friend and confidante. However, the clearest and best comparison with a Dickensian character is Mordecai Fowler. Fowler’s mannerism and brutal cruelty makes him a worthy successor to Billy Sykes; he imposes his smouldering presence on every aspect of the novel. While he is clearly a cousin of Sykes, Fowler is his own man and Entwistle makes this clear. Fowler’s cruelty has root cause, therefore making him a more believable character than Sykes. His final confrontation with Thraxton is a delight to read and emphasises Entwistle’s compelling style of writing.

With winter’s dying breath around the corner, The Angel of Highgate is the perfect “coming of spring” novel. With devastatingly complex characters and skilful prose, Vaughn Entwistle creates a version of Victorian London that sits neatly alongside Dickens and Conan Doyle. The Angel of Highgate’s ultimate charm lies in that fact; it is both original and familiar, something that not many books can pull off.

With thanks to Titan Books.