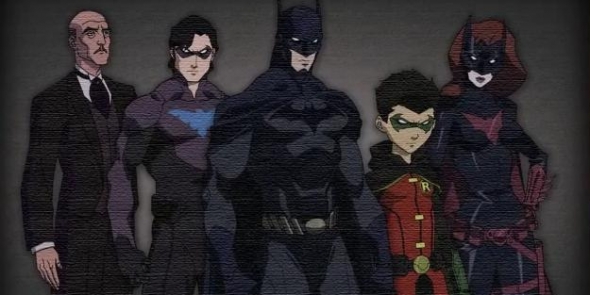 While the previous DC Universe Original Animated Film, Justice League: Gods and Monsters strayed greatly from the normal formula of such films Batman: Bad Blood does the opposite. This might be a good thing, seeing as Justice League: Gods and Monsters was not only a terrible movie but also made the central characters so unlikeable that you were rooting for the villains. However, what Gods and Monsters lacked in style and substance it made up for in that it was different. It kept the viewer interested to see where the hell it would end up. Batman: Bad Blood’s main problem is that, possibly as a reaction to Gods and Monsters, it sticks so closely to the regular formula it becomes somewhat predictable and rather dry.

The film begins with Batman (Jason O’Mara) and Batwoman (Yvonne Strahovski) defeating a gang of crooks, who are in the employ of a new villain called “Heretic”. Batman is seemingly killed in an explosion that he saves Batwoman from learning of this, Dick Grayson (Sean Maher) decides to take on the mantle of his mentor.

The early part of the film is enjoyable with Grayson’s first appearance as Batman fighting Black Mask exciting and reminiscent of scenes in Batman Begins. The earlier parts of the film also give us the opportunity to see more into his psyche – including telling Damien that the least thing he wants to do is be Batman as it was something he’s “being running away from my whole life”. The problems start to set in as the plot is developed; Heretic is revealed to be holding Bruce Wayne at the request of Talia al Ghul, Damien’s mother.

Having taken over her late father Ras’ empire Talia wants to try and take over the world by brainwashing Wayne. In quick succession, we go from Heretic being revealed as Damien’s clone, Heretic dying and Grayson, Damien, Batwing (like Batwoman a somewhat shoe horned in character) and Batwoman saving Wayne. After the fight, the screen fades and for a moment it seems like the film has finished. Yet, at only 40 minutes into this 70-minute feature film there is another half an hour to go before the actual end. The film then drags on for a bit with it being revealed that Batman is still under Talia’s control and that she still wants to rule the world, etc, etc. After seemingly finishing the film thirty minutes before the end, Bad Blood turns into a zombie; wandering about trying to find someone to put it out of misery before it eats the brain of the last conscious audience member.

O’Mara does a good job as Batman; his gruff voice seems to have improved since Batman vs Robin and though he’s only in the film for a while he does seem like Batman.

Yvonne Strahovski pulls off a convincing and at times likeable Batwoman. Admittedly, some of her “sassy” dialogue is rather grating (her comment about the originality of Batwing’s name is somewhat unintentionally ironic given her own moniker) but underneath there is an interesting and unique character that will hopefully be given more attention in future films.

With the DC Cinematic Universe revving up its engines, less attention will probably be paid to animated outings such as Batman: Bad Blood. While this is partly a shame, Bad Blood could easily be ignored. It isn’t special or different; it does the best it can but can never be anything more than a bog-standard Batman outing. At least it is better than Gods and Monsters.