In previous years we at this humble website had reviewed each episode of the then new series of Doctor Who individually as they went out. However, in the spirit of the return of the two parters it has been decided to review the two parters together as if they were one coherent story. So let us begin with the series opener, penned by that jolly Mr Moffat – The Magician’s Apprentice/The Witch’s Familiar.

Starting off with a strong beginning, The Magician’s Apprentice looks like it is going to be a classic Who story. The Doctor on Skaro, battling against his oldest foes and a choice from his recent past that he seems to be regretting. However, the problem is that this set up takes so long to set up. 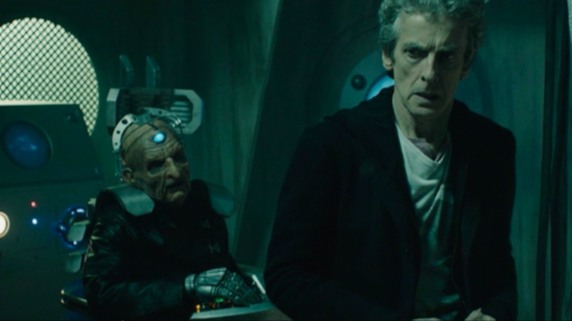 The main reason for this is that the first episode feels more like a checklist of things we have to get through and do before we can actually get to a point in the story where, you know, stuff happens. Not to say that interesting stuff doesn’t happen in TMA. Far from it; we see the return of Davros in a spectacular way; Missy also returns in her usual way with the normal over the top fun that everyone now expects and loves about the character and we also got to see some interesting shots such as the fantastically mad moment when The Doctor arrives on a tank playing a guitar. The trouble is though is that though these are great moments, they are just that – moments. The nice scene here or there does not build a structured or good story. In between these moments we see the usual ABCDE formula that often plagues writers who don’t always thinks about their plots.

Point A: Reintroduce Clara and get her to realize that she needs The Doctor.

Point B: Clara meets up with Missy who doesn’t know where The Doctor is but can find him.

Point C: Missy and Clara meet The Doctor and do exposition. They then meet Colony Sark who takes them to

Point D: A mysterious location that our Missy and Clara explore while The Doctor goes to

Point E: In which the Time Lord meets up with Davros and Missy and Clara set up the cliff-hanger.

Now, the point by point nature of drama is central to the mechanics of it – without a basic point by point structure in the writer’s head the whole thing would fall flat. However, Moffat’s problem seems to be that his plot structures are so obvious. We now expect that the first part of a story is nothing more than him building up to something, which really should be dealt with in the first few minutes or so, rather than take up 45 minutes of our time setting something up for us then to have to watch another 45 minutes to actually figure out what is going on.

By the time we get to The Witch’s Familiar however things improve. Now that everything is set up Moffat lets full rip writing some cracking scenes for The Doctor and Davros to spar off while also giving some great one lines to Missy (“We’ve got a stick”, “Tell them the bitch is back” etc) while also keeping the plot flowing. In the end of course, there isn’t really that much plot which is forgivable because Moffat produces such good dialogue in the second episode. The problem is, that while you are watching the episode you can focus on the dialogue and how good it is but by the time the episode ends you are left pondering. Why did the Daleks need Davros in the first place? Why build a living sewer that could erupt at any moment and destroy the entire Dalek city right under said city? What happened to the Daleks when they got the regeneration energy? Did they become Time Lords or could they just regenerate? And so on and so forth. Without having a mixture of good story and good dialogue/concepts ultimately the whole thing falls down when you reconsider it. It doesn’t make the whole thing bad per say, it merely makes it far less effective than it could have been.

Acting wise we get a treat in the two guest actors that are brought in – Michelle Gomez as Missy and Julian Bleach as Davros. Gomez sizzles in her part as Missy, going from funny to murderous in the blink of an eye. She creates the impression of an insane, twirling Mary Poppins – the sort of Mary Poppins you don’t want to bump into on a cold, dark night. Bleach also excels as Davros. While The Stolen Earth/Journey’s End gave Bleach some good material to work with as Davros, he really brings the character to life. Moffat’s dialogue helps Bleach master the whole range of emotions in order to manipulate The Doctor to his will before turning on him. Hopefully, both will return in the near future.

Overall, The Magician’s Apprentice/The Witch’s Familiar aren’t the worst Moffat stories that have existed. They feature good pacing, great dialogue and some interesting visuals but the whole thing is ultimately let down by a lack of a solid, driving plot to maintain the situation.

Next Time: Under The Lake/Before The Flood.