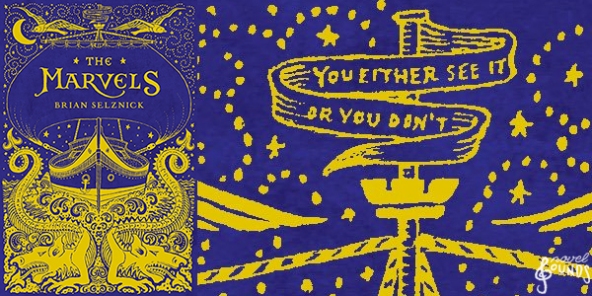 From the Caldercott Medal winning author of The Invention of Hugo Cabret and Wonderland comes a breath-taking new voyage. In this magnificent reimagining of the format he originated, comes two standalone stories juxtaposed the first in nearly 400 pages of continuous pictures, the second in prose together they create a beguiling narrative puzzle.
The adventure begins on a ship at sea in 1766 with a boy named Billy Marvel. After surviving a shipwreck, he finds work in a London theatre. There, his family flourishes for generations as brilliant actors until 1900 when Leontes Marvel is banished from the stage.

Nearly a century later, Joseph Jervis runs away from school and seeks refuge with an uncle in London. Albert Nightingale’s strange, beautiful house with its mysterious portraits and ghostly presences captivates Joseph and leads him of a search for clues about the house, his family and the past.

A gripping adventure, an intriguing invitation to decipher how the two narratives connect and a moving exploration of our need to belong and tell stories, The Marvels is a masterful storytelling feat from an artist at the vanguard of creativity. In The Marvels, Selznick weaves two supposedly unconnected stories together in a way that shows off his skill as a writer. In some respects you could view the first section of the book as a completely separate story told through Selznick’s intoxicatingly evocative artwork. However, if you did, the book as a whole would be poorer; the richness of the story comes in how the first section plays off against the second to create a dichotomy of contrasting stories.

Selznick’s dramatic and heart-warming story of the Marvels is demonstrated through a series of wonderful illustrations that show the story without it having to be told. Beginning on the ship, the Kraken in which Billy Marvel is serving as cabin boy, Selznick breathlessly spins us through the centuries and shows us the evolution of the Marvel family from helping to build theatres to starring in them. The depth and beauty of Selznick’s artwork is astounding. Examples of the truly breath-taking imagery can be found at the beginning of the story, during the shipwreck of the Kraken Selznick creates a rich and vivid depiction of the sea, matched by the utter despondency seen on Billy’s face.
Selznick also astounds in his depiction of the theatre itself; a colossal building that almost consumes the actors that appear on it both figuratively and actually. Selznick’s final piece for the first section will send the reader’s pulse racing and make them want to immediately journey on to the second half of the story.

The second part is equally well handled with the journey from picture to text done in a seemingly effortless way. Selznick creates a great central character in the form of Joseph Jervis who is both sympathetic and realistic. His reaction to the situation that he finds himself in is genuine and effective; he keeps us interested in the story alongside the overarching mystery. Selznick also brings up a matter not normally talked about in children’s literature and deals with it admirably.

The Marvels is a tremendous book which keeps the reader hooked from beginning to end. It tantalises and teases the reader until it comes to its ultimately satisfying conclusion. I’d highly recommend this book to anyone who wants to give their child a fascinating and compelling read.

With thanks to Scholastic Books. You can order a copy of The Marvels from Scholastic here.

One response to “The Marvels Review”