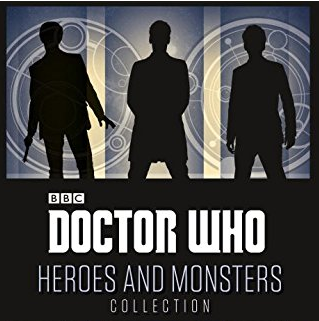 The Heroes and Monsters Collection brings together our favourite short stories from the last ten years of Doctor Who. In these tales the Doctor and his companions face the Daleks, the Cybermen and many more terrifying foes. It also includes three brand-new stories for 2015, featuring the War Doctor, Clara and the Twelfth Doctor.
With all the humour and thrilling action of the iconic television programme, the Heroes and Monsters Collection is a wonderful read for any Doctor Who fan.

Heroes and Monsters is an interesting if uneven collection of short stories that focuses on Doctor Who from the last ten years. While this may suggest a balanced collection, it isn’t. If you’re expecting to find stories from the Ninth Doctor’s era of the show then prepare to be disappointed. Indeed the majority of the book’s stories focus on the Tenth Doctor’s era of the show.

This doesn’t mean that the collection is a bad one, far from it. Many of the stories in the collection manage to chime perfectly with each era they represent. For example, The Hero Factor perfectly sums up Tennant’s era as The Doctor, showing him as the traditional hero. The humour injected into this story by Stephen Cole also marks out The Hero Factor as a particularly good example of the collection. Cole’s use of the usual Tennant witticism is totally in keeping with the character’s usual portrayal.

This is repeated throughout the book with each story, however long or short it is keeping the true essence of Doctor Who; a sense of fun and adventure mixed in with battling the forces of universal darkness. Other stand out stories in the collection includes The Stranger, When The Wolves Came, The Planet That Wept and The Buyer’s Remorse. Each piece perfectly captures the individual Doctor’s era perfectly. Gary Russell’s characterisation of the Twelfth Doctor in Buyer’s Remorse is also particularly noteworthy as Russell manages to make Capaldi’s Doctor seem like a mixture of the Doctor that appeared on screen during Series 8 mixed in with a slightly more traditional version of the heroic time traveller from Gallifrey.

Overall, Heroes and Monsters Collection is solid and decent collection of short stories that encompasses Doctor Who from Tennant’s era up to Capaldi’s. The only problem for those that requires completion is the fact that Eccleston’s Doctor is absent but aside from that the collection is highly enjoyable. Packed with fun filled action moment, the Heroes and Monsters Collections is highly recommended

With thanks to Penguin Books. You can order a copy of the Heroes and Monsters Collection from here or directly from Penguin here.

One response to “Doctor Who: Heroes And Monsters Collection Review”