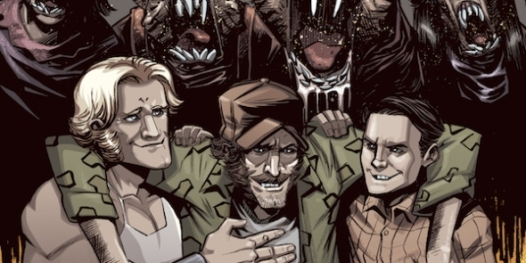 Set in rural North America, Blood Feud tells the story of a group of friends living in Spider Creek. Each year, a migration of spiders happens through the town. However, this time it isn’t only the spiders that are migrating. The Whatley family were always said to have been touched by witches and it now seems like the old rumours have come true. A new horror is emerging in Spider Creek and it isn’t just the spiders that should be fleeing…

Oni Press’ Blood Feud reunites writer Cullen Bunn (Deadpool Kills the Marvel Universe, Uncanny X Men) with artist Drew Moss (Terrible Lizard, The Crow: Pestilence) and colourist Nick Filardi (Helheim, Adventures of Superman) to create a suspenseful and dark new series. Bunn’s writing style lends itself to horror and that is what Blood Feud is; a funny horror. The first issue nicely sets the scene – a remote town in the deep country; strange activity from the local wildlife and a creepy old house on the edge of town. You know the drill by now and though the horror conventions are familiar, the way they are done isn’t. Bunn creates a nice and spooky setting that stands out from the normal horror type not least because of its name; Spider Creek.

Bunn’s writing is enhanced by the artwork of Drew Moss. Moss creates some truly vivid and revolting images for the comic which help bring Bunn’s writing to life. His illustrations become more integral to the comic the further on it goes as without them the climax of the first issue would be lacking in dramatic shock value. The illustrations are further enhanced by the world of colourist Nick Filardi. Filardi’s use of inks brings the characters alive and gives a gritty and grungy edge to them making them seem somehow grottier and more grotesque.

The first issue of Blood Feud is brilliantly done and I’ll go into more detailed critiques in the main review but I would recommend going out and getting a copy. A great addition of the Oni catalogue.

2 responses to “Preview of Blood Feud #1”