Following on from the previous two editions look at fairly disappointing stories, this time we look at a resoundingly good story from recent Batman history – Voiceless (Batman: The Dark Knight 26 – 27).

While the previous two stories that we have looked at have been fanciful and bad, Voiceless is grounded and brilliant. A tale about exploitation and immigration, it taps into some of the concerns that are prevalent in modern society. It manages to do what all the best stories do: it makes you think.

The story is unusual for a comic as it contains no speech captions. Instead, the story is told completely through the illustrations. While this technique is sometimes used in comics, it often comes across as gimmicky rather than actually purposeful.

The lack of text is significant because it represents the lack of voice that people who are forced into slave labour or who are forced to migrate to another country feel. It also means that we get to see some beautiful examples of showing rather than telling.

Throughout the comic the main character, who is forced to leave her starving homeland, expresses how she feels through the illustrations that are presented in the comic.

The illustrations are beautifully done and the comic features some of the best artwork you are likely to see in a Batman comic. Alberto Ponticelli’s artwork is the core of the comic and if the story had been told by a lesser artist, then it would have been hardly as effective.

Ponticelli’s exquisite lines contrast sharply with the images he is actually depicting. Ponticelli’s depiction of both the slums of the foreign country from which the Asylum seekers leave to the decayed and battered backstreets of Gotham is incredibly realistic. The mournful and at times extremely depressing artwork speaks volumes, this might not be able to be translated into the text.

Scenes in which our main female protagonist attempts to get aide for her family from the foreign forces and is unsuccessful is incredibly potent. The single image of the main protagonists’ sister crying manages to convey more than any amount of dialogue could.

Ponticelli’s depiction of both the Penguin and Batman are wonderful. Batman is shown to be both an avenging angel and also a kind, gentle man. He rescues the people who have been taken from their homeland and makes sure that they are safe before going against the Penguin. The Penguin is a truthful depiction of the human traffickers he represents. The success of the story is that even though it is about a man dressed as a bat, it is also about human tragedy and about the horrors that persist in modern society. 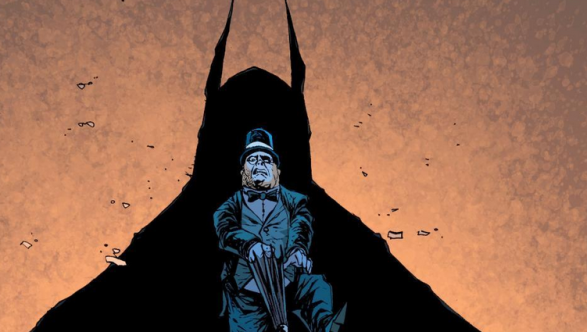 Overall, Voiceless is a truly unique story. It tells a subtle and ultimately uplifting story about the abuse that permeates modern society and how if it is not stopped then it may ruin us all.

On the next The Dark Tales of The Dark Knight, Ghosts.