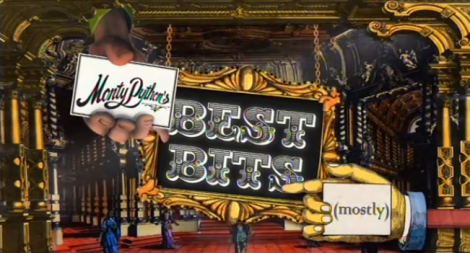 Following on from the success of their broadcast of Monty Python’s last live stage show, Gold have commissioned a new six part series looking at celebrities favourite Python sketches.

As opposed to simply showing bits from the sketches, one of the great things about the series is that the sketches that are chosen are shown in full after the celebrities talk about them. This way, the audience is still engaged and doesn’t nod off due to the slightly dryness of the talking heads format. By mixing some interesting anecdotes and opinions (such as Jim Carrey’s anecdote about Monty Python and farming imaginary horses) with the sketches; the programme manages to bring Python alive in a way that those who are not familiar with the group can watch it without being bogged down with the full story of the group.

Instead, Monty Python’s Best Bits (Mostly) presents a fun and enjoyable guide to some of the best Monty Python sketches with the odd opinion from various celebrity fans. I’d highly recommend that you check out this series, it is a great trip down memory lane excellently presented by Hugh Bonneville with sketches chosen by Jim Carrey, Stephen Fry, Dara O’Brien, Jessica Hyne, Ben Miller and many more. It is altogether a fantastic show.

Episode One is broadcast on the 3rd of November on Gold.