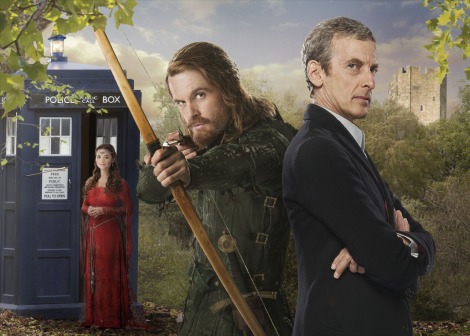 In a sun-dappled Sherwood Forest, the Doctor discovers an evil plan from beyond the stars and strikes up an unlikely alliance with Robin Hood. With all of Nottingham at stake, the Doctor must decide who is real and who is fake. Can impossible heroes really exist? The Doctor is about to find out.

Robot of Sherwood is Mark Gatiss’ best episode of Doctor Who ever. Like his previous years offering, The Crimson Horror, it interjects something that is lacking from some of his other stories: Gatiss’ wonderful sense of humour. The whole episode is fantastically funny and exudes real warmth that even The Doctor can’t dampen. It feels like a tribute to the type of thigh hitting Tyrone Power type films from the 1940s. Gatiss has taken this fun and managed to put it into an episode featuring a darker Doctor meaning that the episode becomes even funnier.

Gatiss weaves the legends of Robin Hood and the legends of The Doctor together into a wonderful, entertaining pattern. He creates a plot which is like a Robin Hood legend with some sci- fi bits added on. Gatiss clearly knows the Robin Hood legends well and mines the melting pots of them and mixes them in with the equally rich legends which are part of Doctor Who. He also manages to draw excellent parallels between The Doctor and Robin Hood which makes the episode not only funnier, because they are at loggerheads for most of it, but also more touching because it shows the great loneliness both characters feel.

Peter Capaldi shines in this episode. While Capaldi managed to truly establish himself in Deep Breath this episode really feels like the beginning of a new era. He truly is The Doctor in this story more than the previous two episodes. Because this episode features the first unique plot and characters this series, it finally sems like we are in Capaldi’s era as opposed to still hanging on to the end of Matt’s era. Gatiss knows Capaldi’s Doctor and gives him some wonderful dialogue. Capaldi is also enjoying himself and revels in his character, particularly the scene in which he and Robin (Tom Riley) are locked in a dungeon under Nottingham Castle. Both actors play off each other wonderfully and make the scene fantastically funny.

Tom Riley gives a great star turn as Robin Hood. While Capaldi’s Doctor is the antithesis of the typical hero, Riley’s Hood is a fine example of the typical sword wielding Tyrone Power style hero. His almost spoofy portrayal of the square jawed Hood matches and contrasts wonderfully with Capaldi’s darker Doctor. Not only is it brilliant for the comedic scenes it also helps highlight the difference and similarities between the two characters. Riley also makes the character of Robin extremely likable and manages to strike the right balance between the typical hero and a jerk.

Robot of Sherwood is a brilliant piece of writing, a tour de force in terms of acting and wonderfully directed by Paul Murphy. Gatiss has managed to top his previous comedic Doctor Who episode in a delightful manner. Mixing the legends of Robin Hood, the real history of the era and the mythology of Doctor Who, Gatiss has created the best episode of the current series. I doubt the next episode can top it.