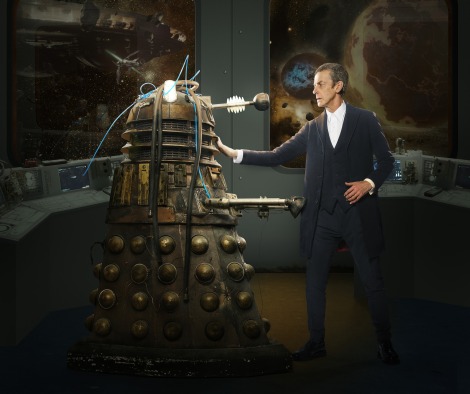 A Dalek fleet surrounds a lone rebel ship, and only the Doctor can help them now… with the Doctor facing his greatest enemy he needs Clara by his side. Confronted with a decision that could change the Daleks forever, he is forced to examine his conscience. Will he find the answer to the question, am I a good man?

Into The Dalek is a proper Dalek romp. While previous stories (I’m looking at you Asylum of the Daleks) have sort of skirted around using the vile pepper pots to their full potential, Into The Dalek shows them in full action exterminating stuff.

All right, most of the time there is only one Dalek and for a lot of the episode we don’t actually get to see it but even so it feels more Daleky than before. The Daleks are better written in this story than previously and seem more like merciless killing machines than tin robots that stand around and do nothing. They are more effective and more of a threat; they manage to kill off a good deal of the soldiers on the base without too much trouble. The one problem that Into The Dalek has is that is has been done before. Not exactly of course, The Doctor has never been in a living Dalek before but the plot and structure of the story feel eerily familiar.

The story that Into The Dalek feels eerily similar to its Dalek. Both stories see The Doctor arriving at a base to see a lone Dalek, captured by humans, being experimented on. The Doctor in both instances must try and destroy the Dalek that the companion thinks can be good but The Doctor knows only too well that it can’t.  In the end, the Dalek commits suicide.

Structurally the main difference between Into The Dalek and Dalek is that Into The Dalek has more Daleks in it; really that is about it. Of course, it isn’t exactly the same but it does feel the same. While watching the story it isn’t something you notice that much but after watching it the similarities hit you. Not that Into The Dalek isn’t a great episode. It is and very enjoyable but it isn’t really original. It’s kind of like watching a repeat of Dalek but with a different actor in place of The Doctor and companion. You still enjoy it but it doesn’t give you the same sense of satisfaction as watching something really original.

Even if the episode itself isn’t completely original, Peter Capaldi as The Doctor is. He is wonderfully dark and brooding and after the hiccoughs of Deep Breath his Doctor is now fully formed, dark coat and all. The scene in which Capaldi’s Doctor confronts the Dalek inside its own mind at the end is masterfully done. He injects a real sense of urgency and drama into the scene and his reaction when the Dalek looks into his soul is fantastic. Capaldi now owns the show like no other Doctor has. Instead of trying to win the audience as Smith and Tennant did, Capaldi steps in boldly and simply takes charge. You either go along with him or you don’t.

The directing from Ben Wheatley is fantastic. Wheatley managed to really capture Victorian London before and now he does the same with the space aged future. The set looks moody and dark which goes with Capaldi’s look as The Doctor. I hope Wheatley comes back to Doctor Who as he is one of the best directors to grace the show in recent years.

Into The Dalek is an enjoyable episode and it is one I’ll defiantly watch again, mainly for Capaldi’s acting and Wheatley’s directing, but even so it is an enjoyable romp. The main point I’ve been trying to get across is the story could have been better if it has had an original central idea. Without a solid foundation, the whole thing feels repetitive of Dalek. Seeing as Dalek was already kind of remade with Cold War, it is probably time the production team got a new blue print episode other than Dalek.

One response to “Doctor Who: Into The Dalek Review”